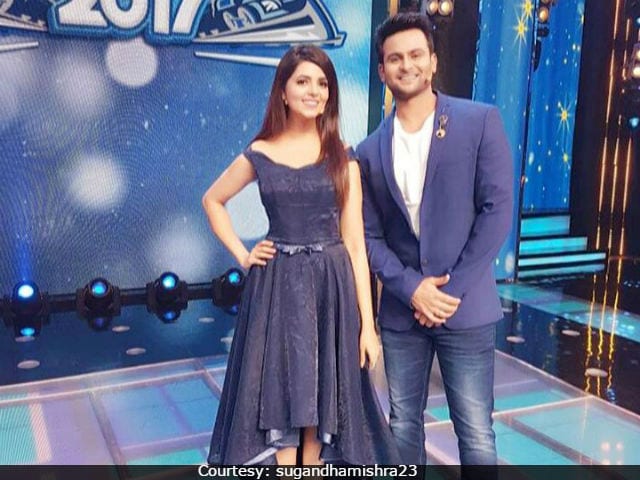 Sugandha Mishra and Sanket Bhosale on the sets of Summer Express 2017 (Courtesy: sugandhamishra23)

New Delhi: Comedian Sugandha Mishra, who featured in The Kapil Sharma Show, is not marrying her co-star Sanket Bhosale. Sugandha and Sanket wedding rumours swiftly went viral a couple of days ago. However, Sugandha calls the news to be 'false.' "My mom doesn't stay with me and she called me up to clarify the same. She knows Sanket and was shocked to hear that I have decided to get married without even informing her. But everything is cool at home now. I made her understand that this is a false news and we had a great laugh over it. I think the report is a bad joke and lacks content. It's a very bad thing that people cook up a story and don't even clarify before publishing it," she told The Times Of India.

Sugandha and Sanket used to feature as a couple in the embattled Kapil Sharma Show. Both of them have together hosted various comedy and reality shows too. "I don't know where this news is coming from. Whoever has written this has not tried calling anyone of us. We are just good friends and we are not getting married. I think this story is a figment of someone's imagination", Sanket clarified to TOI.

Sugandha became a household name after featuring in the singing reality show Sa Re Ga Ma Pa Singing Superstar and The Great Indian Laughter Challenge. She starred as Vidyavati, a teacher in The Kapil Sharma Show while Sanket is best known for mimicking Sanjay Dutt and other Bollywood actors. Over the weekend, the duo together hosted Summer Express 2017.

Promoted
Listen to the latest songs, only on JioSaavn.com
Sugandha quit Kapil Sharma's show after Kapil's fight with Sunil Grover. Kapil, allegedly drunk, is accused of hitting Sunil with a shoe on a flight. After the altercation, Sunil quit the show. His other co-stars including Chandan Prabhakar and Ali Asgar also boycotted Kapil Sharma's show. Due to falling TRP's ace comedian Raju Srivastava was casted in. Now, Sunil Grover has collaborated with Ali Asgar for a comedy show on the same channel and reportedly, Kapil Sharma's show will be replaced by Salman Khan's Dus Ka Dum.