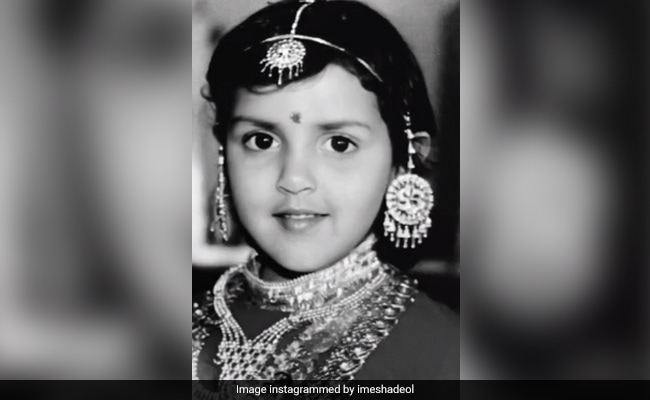 Esha Deol in a still from the video.(Image courtesy: imeshadeol)

Esha Deol and her love for dancing is known to all. Just like her mother, actress Hema Malini, Esha too is a trained in classical dance. In her latest Instagram post, the actress revealed that she was "never a barbie girl" and that she preferred dancing even during her childhood days. Esha Deol dropped a video featuring pictures of herself from her different dance events. While four pictures are from recent times, one of the pictures in the video is from Esha's childhood days. In all the pictures, Esha Deol can be seen all decked up in traditional attires for her dance performances. "Never a barbie girl though," Esha wrote in the caption. Many fans of the actress

commented on her post. "So cool," a fan wrote, while most others dropped heart emojis on Esha's post.

Esha Deol and Hema Malini are trained classical dancers. While Hema Malini is a trained Bharatnatyam dancer, Esha Deol is trained in Odissi. They often perform together at events like Krishna Janmashtami.

Earlier this year, on International Dance Day, Esha shared two pictures of herself from one of her stage performances. "Today is international dance day & I take immense pride in my contribution towards our #indianclassicaldance .... being an #odissidancer from a very young age & having performed on stage all over our country and internationally," she wrote in the caption of her post.

Esha Deol keeps her fans updated about her every day life through her social media posts. She recently shared a stunning picture of herself sporting a black hat. She dedicated the caption of the post to her new hat and wrote: "No matter how many punches life throws at you .... keep ur hat and heart aligned."

Esha Deol made her Bollywood debut in 2002 with the film Koi Mere Dil Se Poochhe. She later appeared in several films like Dhoom, Yuva, Kaal and No Entry. She was last seen in the short film Cakewalk.