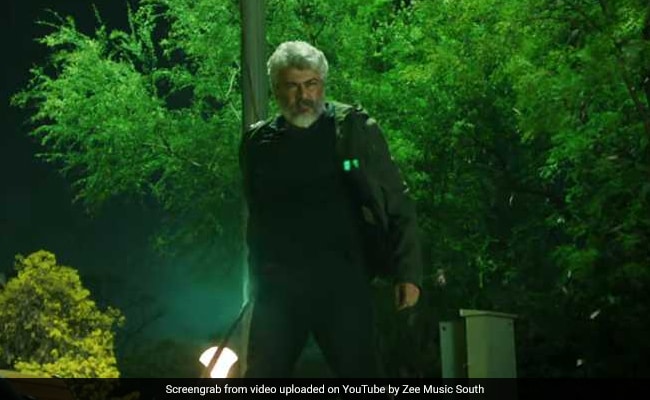 Ajith in a still from the trailer of Nerkonda Paarvai. (Image courtesy: YouTube)

Ajith occupied a top spot on the list of trends after the trailer of his film Nerkonda Paarvai hit the Internet on Wednesday. It wouldn't be wrong to say that the film, which is the Tamil remake of Pink, is as good as the original. The trailer of Nerkonda Paarvaibegins with a tribute to late actress Sridevi, whose husband Boney Kapoor has produced the film. The highlight of the two-minute-long video is Ajith's intense performance and the hard-hitting dialogues on morality (as defined by the society), sexism and sexual violence. Most of the scenes appear to be strikingly similar to the film's original rendition. What sets Nerkonda Paarvai apart are the high-octane action sequences performed by Ajith. Shraddha Srinath's performance is equally gripping as Meera Krishnan (the role that was originally played by Taapsee Pannu).

Check out the trailer of Nerkonda Paarvai here:

Besides Ajith and Shraddha Srinath, Nerkonda Paarvai also features Abhirami Venkatachalam and Andrea Tariang, who has reprised her role in the Tamil rendition of the film.

During an interview with news agency IANS earlier this year, film's producer Boney Kapoor said that while working with Ajith in English Vinglish, Sridevi had expressed her desire to work with Ajith for their home production. "Ajith suggested remaking Pink in Tamil and Sridevi immediately agreed as she thought it was most appropriate and timely film to make and Ajith would bring all the elements required to make it into a great Tamil film," IANS quoted Boney Kapoor as saying.