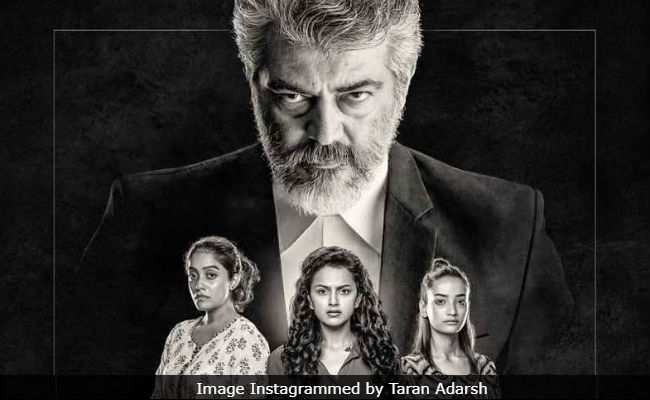 Ajith Kumar occupied a spot on trends list, soon after the makers of the Tamil version of Pink, announced the film's new title and shared the first poster on Monday night. The film, which has been produced by Boney Kapoor, has now been titled Nerkonda Paarvai. The poster features Ajith Kumar, Shraddha Srinath, Abhirami Venkatachalam and Andrea Tariang, who has reprised her role in the Tamil rendition of the film. Bollywood trade analyst Taran Adarsh shared the film's poster on social media and wrote: "Boney Kapoor ventures into Tamil films. Ajith Kumar in Nerkonda Paarvai. Directed by H Vinoth. Official adaptation of Pink (with some changes)."

Boney Kapoor, who has produced Nerkonda Paarvai, in an interview with news agency IANS earlier this year, spoke about the reason behind collaborating with the Tamil superstar and told IANS: "While working with Ajith in English Vinglish, Sridevi had expressed her desire that Ajith does a Tamil film for our home production. Nothing exciting came up till one day last year. Ajith suggested remaking Pink in Tamil. She immediately agreed as she thought it was most appropriate and timely film to make and Ajith would bring all the elements required to make it into a great Tamil film."

Ajith is best-known for his performances in films such as Amarkalam, Dheena, Villain, Vedalam and Vivegam among others. He was lats seen in Sivakumar Jayakumar's Viswasam.