"Angad Bedi taking up the whole bed, again!" wrote Neha Dhupia along with the LOL emojis 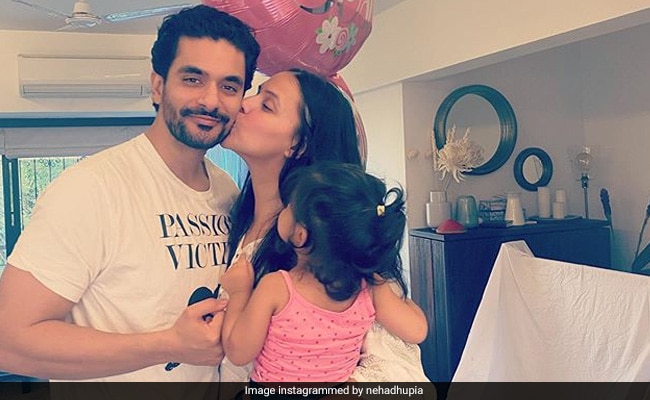 Neha Dhupia and Angad Bedi often paint Instagram red with their loved up posts but their daughter Mehr steals the show every time she features in a post. On Wednesday, Neha Dhupia shared a father-daughter moment on Instagram, featuring Angad and Mehr, and she swapped an adorable caption for an ROFL one. "Angad Bedi taking up the whole bed, again!" wrote Neha along with the LOL emojis. In the photo, Angad can be seen playing with Mehr in the little one's cot with his feet up, which didn't fit inside, up in the air. Neha's post cracked up Angad Bedi as well. Take a look:

Neha Dhupia and Angad Bedi's wedding anniversary coincides with Mother's Day every year, calling for double celebrations. Here's how the lockdown party of three looked like this year:

Neha Dhupia and Angad Bedi had a low-key wedding at a Delhi Gurudwara in 2018. They later revealed the rushed nature of their wedding was due to Neha's pregnancy, which was kept under wraps for a few months. Angad Bedi was last seen in The Zoya Factor where he shared screen space with Dulquer Salmaan and Sonam Kapoor. He will next be seen in Gunjan Saxena: The Kargil Girl co-starring Janhvi Kapoor. On the other hand, Neha was last seen in Priyanka Banerjee's short film Devi. She also features in MTV's reality show Roadies: Revolution as one of the gang leaders.