They welcomed a baby boy over the weekend Neha Dhupia with family at the hospital.

Neha Dhupia and Angad Bedi, who welcomed their second child, a baby boy a few days ago, were photographed outside a Mumbai hospital on Thursday evening. The couple were photographed with their newborn baby as they made their way home. They were accompanied by their daughter Mehr. Over the weekend, Angad Bedi announced the arrival of their baby boy by sharing a super cute picture with Neha Dhupia from her pregnancy days and wrote: "Bedis' boy is here! The almighty today blessed us with a baby boy. Both Neha and the baby are well. Mehr is ready to pass on the "baby" title to the new arrival. Waheguru mehr kare. Neha Dhupia, thank you for being such a warrior through this journey. Let's make it a memorable one for all 4 of us now."

See the pictures of the family at the hospital: Neha Dhupia and Angad Bedi at the hospital. Neha Dhupia at the hospital with the baby. 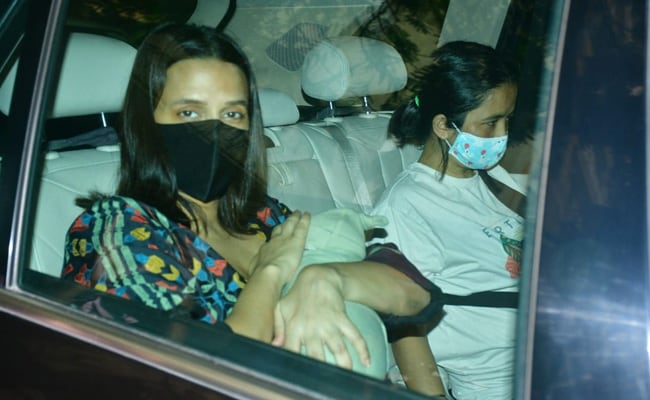 Neha Dhupia photographed with her baby.

This is how Angad Bedi shared the news of the baby's arrival: