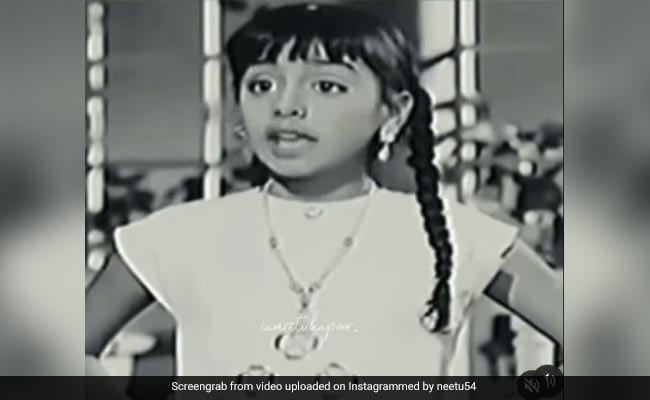 Neetu Kapoor in a still from the video. (courtesy neetu54)

It is Children's Day and Neetu Kapoor has the best gift for her fans. The actress who began her career as a child artist in films shared a lovely montage video of herself from her earliest movies. Neetu Kapoor is seen in a variety of looks and characters, sporting pigtails and cute frocks as she animatedly performs her scenes to perfection. Now that is one actress we can say was born to act. Sharing the video, Neetu Kapoor added the song Dil Hai Chota Sa, Choti Si Asha in the background. She added in the caption, "Happy Children's Day," with a flurry of heart emojis.

Neetu Kapoor was married to actor Rishi Kapoor till his death in 2020. Post her wedding to the actor, Neetu Kapoor took a sabbatical of sorts from films. She made a comeback in a minor role in the 2009 film Love Aaj Kal and followed this up with a few films such as Do Dooni Chaar.

However, now Neetu Kapoor is ready to impress the audience once again with her performance in the upcoming film Jug Jugg Jeeyo. The actress, who has recently wrapped up the shoot of the film, shared a stunning mirror selfie to share the news on Instagram. Looking beautiful in a traditional Indian ensemble, Neetu Kapoor wrote, “Finally wrapped Jug Jugg Jeeyo...Was such a wonderful experience made some lovely friends and gained confidence which was so needed at that time...This movie will always be very special.” Neetu Kapoor will be seen in the film alongside Varun Dhawan, Kiara Advani, Anil Kapoor, Prajakta Koli and Maniesh Paul.

Neetu Kapoor was last seen in the film Besharam alongside her husband, Rishi Kapoor. Their son, Ranbir played the lead role in the film, which was a failure at the box office.