Neetu Kapoor, Back At Work, Shares BTS Pic From The Sets Of Jug Jugg Jeeyo

"Last day with my JJJ squad who have become family, will miss them," wrote Neetu Kapoor 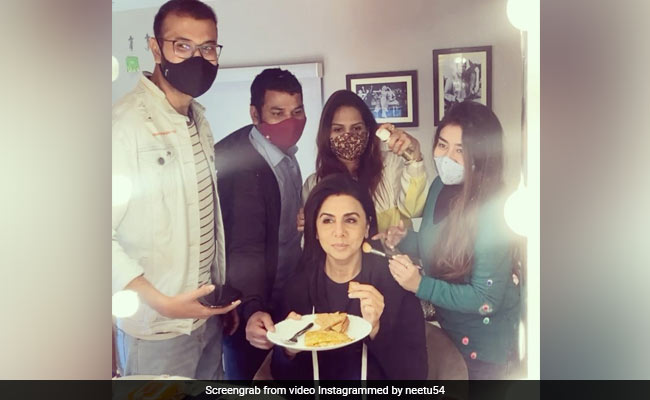 Neetu Kapoor on the sets of the film. (courtesy: neetu54)

Neetu Kapoor, after testing negative for COVID-19, resumed shooting for her next project Jug Jugg Jeeyo. She shared BTS picture and a video from the film and she wrote in the caption: "Last day with my #JJJ squad who have become family, will miss them." In the posts, Neetu Kapoor can be seen posing with her team and crew members. Other than Neetu Kapoor, the film also stars Anil Kapoor, Kiara Advani, Varun Dhawan and content creator (and now actor) Prajakta Koli. The film will be backed by Karah Johar's Dharma Productions and it will be directed by Raj Mehta. In the comments section of her post, Neetu Kapoor's daughter Riddhima dropped a few heart emojis.

Neetu Kapoor announced her association with the project on social media earlier and she wrote: "My first flight, in these scary times. Nervous for this journey. While Kapoor Sahab, you aren't here holding my hand, I know you are with me... RnR thank you for encouraging me to do this."

Neetu Kapoor was married to actor Rishi Kapoor, who died in Mumbai on April 30 after battling cancer for two years. He was 67. Riddhima Kapoor Sahni, who is a Delhi-based jewellery designer, has been staying with her mother in Mumbai since then.