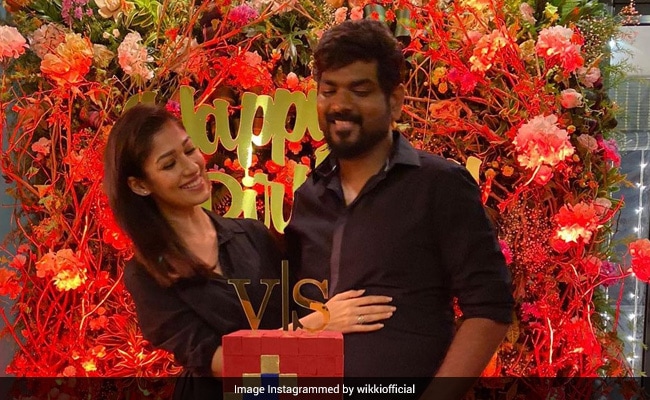 South star Nayanthara gave filmmaker Vignesh Shivan a surprise party. What's the occasion? It's Vignesh Shivan's birthday. Photos from the celebration are trending on social media. We see Nayanthara and Vignesh Shiven in a snapshot posted on his Instagram timeline. The filmmaker's latest update is all in praise of Nayanthara, whom he calls "Thangamey". Here's what he wrote, "Thank you, Thangamey, for the pleasant surprise birthday and the unmatchable gift of your presence in my life." The photos show them standing at a table laid out with cakes and many kinds of delicacies. In the last slide, we get a close-up view of the cakes. The background decor read,  "Happy Birthday Wiki," which is the filmmaker's nickname. Vignesh Shivan added in the caption, "Thank you, dearest friends, for your love and blessings as always."

A few days back, Nayanthara celebrated her mother's birthday. Vignesh Shivan was also present on the occasion. In the photos, we see Nayanthara standing close to her mother and smiling for the camera. "Happy birthday to you dearest, Omana Kurian ammu. God bless you and your golden heart."

After their first film together as producers, Koozhangal (Pebbles), won an award at the International Film Festival Rotterdam, Vignesh Shivan treated us to a beautiful album featuring the two.

On Easter Day this year, Vignesh Shivan allowed us to take a look at his “happy day”.

Last year, too, Vignesh Shivan celebrated his birthday with Nayanthara. "Birthday vibes. With God's grace all your wonderful sweet wishes," Vignesh wrote along with a picture of himself and Nayanthara.

Nayanthara and Vignesh Shivan have been dating for a few years now. The couple met on the sets of the 2015 film Naanum Rowdydhaan and fell in love. Last month, she revealed her engagement ring on a reality show. On the show, she showed her ring and said in Tamil, "This is an engagement ring."

Nayanthara was last seen in the film Netrikann. She will next feature in Annaatthe. The film also stars South superstar Rajinikanth.