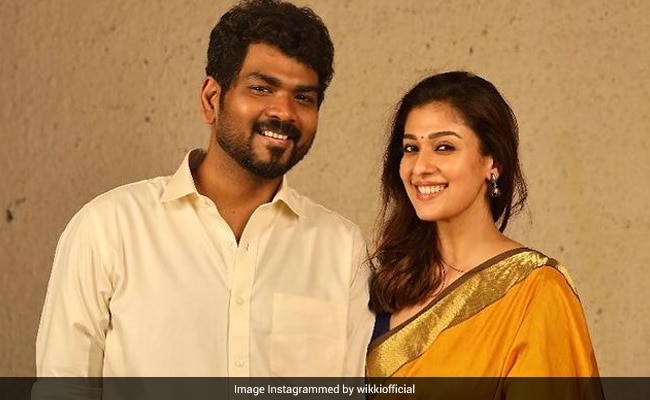 Vignesh Shivan and Nayanthara in an adorable pic (courtesy wikkiofficial)

Did Nayanthara just confirm she's engaged to Vignesh Shivan? On Tuesday, Nayanthara took a top spot on the list of trends after the promo of a show, which has a glimpse of the actress talking about her engagement ring, went crazy viral. Nayanthara, who made an appearance on the television show to promote her new film Netrikann, can be seen speaking to show host Dhivyadharshi in the promo video. Asked about her ring, Nayanthara says in Tamil: "This is an engagement ring." Dhivyadharshi goes on to ask Nayanthara what all she likes about Vignesh Shivan, when the actress says: "Everything". Aww, how sweet is that!

In March this year, Vignesh Shivan appeared to hint at a possible engagement with this loved up post, which offered a glimpse of Nayanthara's ring on the engagement finger. His caption in Tamil - "Viralodu uyir kooda korthu" - roughly translated to "Finger is entwined with life."

In terms of work, Nayanthara was last seen in Malayalam movie Nizhal. Apart from Netrikann, Nayanthara has films such as Annaatthe, Kaathu Vaakula Rendu Kaadhal and Aaradugula Bullet in her line up.

"Love Thy Handles": Swastika Mukherjee Has Body Positivity All Figured Out