Navratri 2022: Inside Sanjay Dutt's Havan At Home In Mumbai

"Held an auspicious havan for Navratra and offered prayers to the Goddess of wisdom," wrote Sanjay Dutt 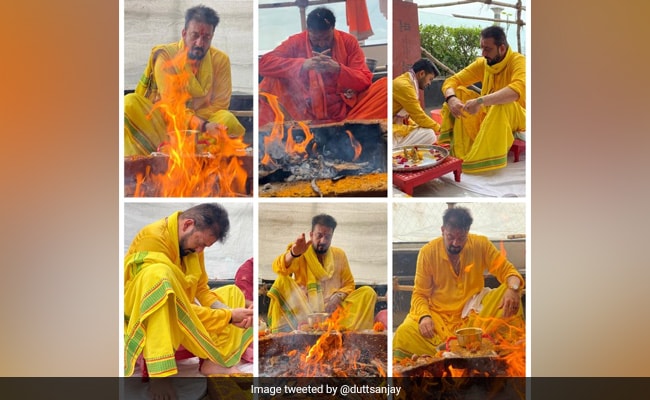 On the occasion of Navami, Sanjay Dutt held a havan at his house in Mumbai. The veteran actor shared a collage of six pictures in which he can be seen performing havan in a traditional yellow ensemble. Sharing the post on Instagram, he wrote, "Held an auspicious havan for Navratra and offered prayers to the Goddess of wisdom, Baglamukhi Mata, for everyone's good health and happiness. May her pristine avatar shower blessings on all of you. Jai Maata Di," followed by folded hands emoticon.

Sanjay Dutt, who was last seen in Shamshera, co-starring Ranbir Kapoor and Vaani Kapoor, often share pictures on Instagram. On the occasion of Gandhi Jayanti (October 2), the actor shared a clip from his movie Lage Raho Munna Bhai, co-starring Vidya Balan and Arshad Warsi and wrote, "Happy Gandhi Jayanti to all!"

On the work front, Sanjay Dutt was recently seen in Shamshera, which was not well received by the audience. Next, he will be seen in The Good Maharaja, an Indo-Polish war drama helmed by Vikash Verma. The movie also stars Dhruv Verma, Deepraj Rana, Gulshan Grover and Sharad Kapoor. It is slated to hit the theatres on December 17 this year. Also, he will be seen in Binoy Gandhi's Ghudchadi, a romantic comedy film which also stars Raveena Tandon and Parth Samthaan in pivotal roles.