In the pictures, Katrina Kaif can be seen lighting the lamp and looking at the divine idols of Gods and Goddesses 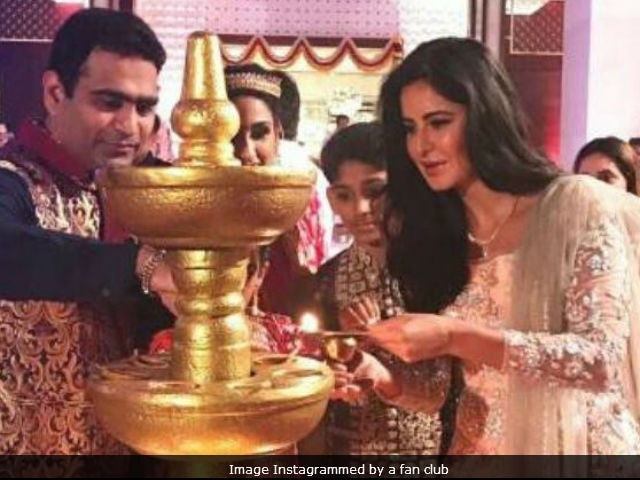 New Delhi: Actress Katrina Kaif, who recently returned from Abu Dhabi, is in a fun mood and enjoying the festivities of the ongoing festival of Navratri. Katrina was filming Tiger Zinda Hai in Abu Dhabi and it seems the Baar Baar Dekho actress now wants to rejoice in the festivities. A fan club on Instagram posted a couple of beautiful pictures featuring Katrina Kaif at Navratri celebrations in Kerala. In one of the pictures, the 34-year-old actress can be seen lighting the lamp while in the other Katrina can be seen looking at the divine idols of Gods and Goddesses. Take a look at Katrina Kaif's Navratri celebrations here:

Recently, Katrina posted a picture with her co-star Salman Khan, in which she revealed that Tiger Zinda Hai is just one song short of a wrap.

Katrina also posted a picture with her Jab Tak Hai Jaan co-star Shah Rukh Khan and filmmaker Anand L Rai from the first day of the shoot of her upcoming yet-untitled film. Katrina captioned the picture: "First day of shoot with the incredible Anand Rai and SRK (super excited to be shooting with him after 5 years). Here's to putting our hearts and souls into creating a wonderful movie together ..."

Promoted
Listen to the latest songs, only on JioSaavn.com
Katrina was last seen in Jagga Jasoos, co-starring Ranbir Kapoor.

Tiger Zinda Hai is a sequel to 2012's Ek Tha Tiger, which was helmed by Kabir Khan. Salman and Katrina will return to play their original roles - a RAW agent called Tiger and a Pakistani spy named Zoya, respectively. The film will hit the screens on December 22 while Katrina also has Thugs Of Hindostan and Anand L Rai's yet-untitled film in the pipeline.