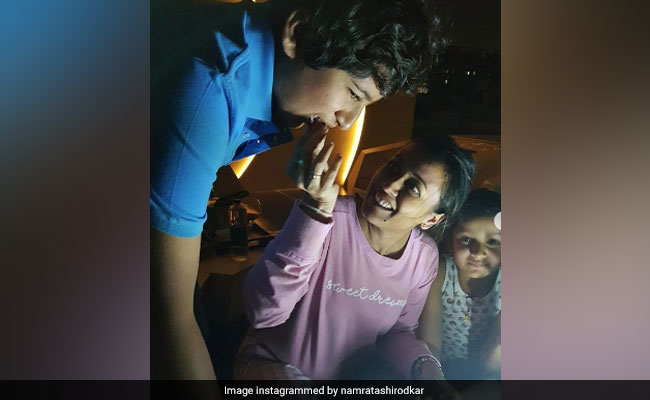 Namrata Shirodkar, who celebrated her 47th birthday with her family and friends in Hyderabad recently, shared photos from the cake cutting on Instagram on Thursday. The set of photos shared by Namrata feature her kids Sitara and Gautam and her friends. "Birthday night with family and friends," she captioned the photos, adding hashtags "#timestocherish", "#quietevenings" and "#homevibes". Mehr Jessia, a close friend of Namrata, was also part of the birthday celebration. The post shared by the actress has 23,878 likes in just an hour. Namrata's actor-husband Mahesh Babu was not part of the birthday celebration since he was reportedly shooting in Mumbai for his forthcoming film Maharshi.

Here are some more photos from Namrata's well spent birthday with her friends and family at Hyderabad's Falaknuma:

Day off @the Falaknuma with the people i love #qualitytime #cherishedmoments

On Namrata's birthday, Mahesh Babu had posted an adorable wish for her on Instagram. "Happy birthday, my sweetest love. Thank you and love you for everything that you mean to me," Namrata Shirodkar wrote. In the picture, Namrata can be seen hugging him.

Happy birthday, My sweetest love Thank you & Love you for everything that you mean to me @namratashirodkar

Gautam and Sitara often feature on Namrata's Instagram posts. On Wednesday, the actress had shared a photo of herself and her daughter and captioned it: "Mahesh Babu, your daughter never fails to surprise me." The family went to Dubai for New Year's and Namrata had shared several pictures from the vacation.

Spent a lovely evening with The sweetest @mirzasaniar and her husband @realshoaibmalik and friends for dinner many blessings to her new born baby starting the new year with friends and family 2019... I'm ready for u :) #dubai #happynewyear #holidaysgettingover

Namrata Shirodkar, a former beauty queen, made her Bollywood debut with Salman Khan and Twinkle Khanna's Jab Pyaar Kisise Hota Hai, which released in 1998. Hero Hindustani, Pukar, Dil Vil Pyar Vyar, Vaastav, Astitva and Bride And Prejudice are some of the other films she has featured in. Namrata married Mahesh Babu in 2005 and welcomed their first child Gautam in 2006. Sitara, 6, was born in 2012.