Here's what Nafisa Ali posted on her anniversary: "It's our 39th wedding anniversary today ... feel happy" 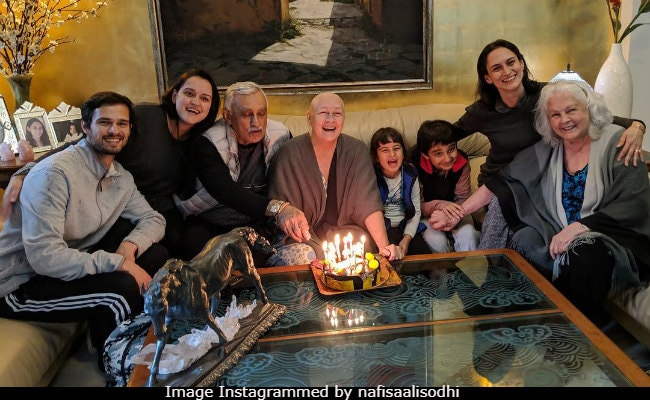 Nafisa Ali Instagrammed this photo on her anniversary (courtesy nafisaalisodhi)

Veteran actress Nafisa Ali, who is undergoing treatment for cancer, celebrated her 39th wedding anniversary with husband retired Colonel R S Sodhi on Tuesday at her Defence Colony residence in the National Capital. On Instagram, the 62-year-old actress shared a lovely family photograph, also featuring her children - daughters Pia and Armana, son Ajit and grandchildren. "It's our 39th wedding anniversary today ... feel happy," she captioned the photo, in which Nafisa Ali and her husband can be seen in the midst of a cake-cutting session as they are surrounded by their children and grandchildren. Nafisa Ali's mother was also part of the celebrations.

Here's what Nafisa Ali posted on her anniversary:

Nafisa Ali had revealed she has been diagnosed with peritoneal and ovarian cancer in November and has kept her fans and followers updated on social media and her honest Instagram posts are always as heart touching as ever. Earlier in January, she write about losing hair from her eyebrow and eyelashes. "I am so deeply touched by all your wishes and feel blessed reading messages from around the world. Gives me hope and courage," she wrote after her third chemotherapy session.

Done my 3rd Chemotherapy 10th January '19 and now the battle begins ... I am praying to get well .I am so deeply touched by all your wishes and feel blessed reading messages from around the world. Gives me hope and courage.

During the cancer reveal, Nafisa Ali had mentioned - "my children are my reason to get better through my cancer struggle and overcome" - something which reflects in most of her Instagram posts.

All of us together for my eldest Armana's Bday today .

Nafisa Ali, who is a former beauty queen and a swimming champion, is best known for her roles in films such as Junoon, Major Saab, Bewafaa , Life In A... Metro and Yamla Pagla Deewana and was last seen in Saheb, Biwi Aur Gangster 3.