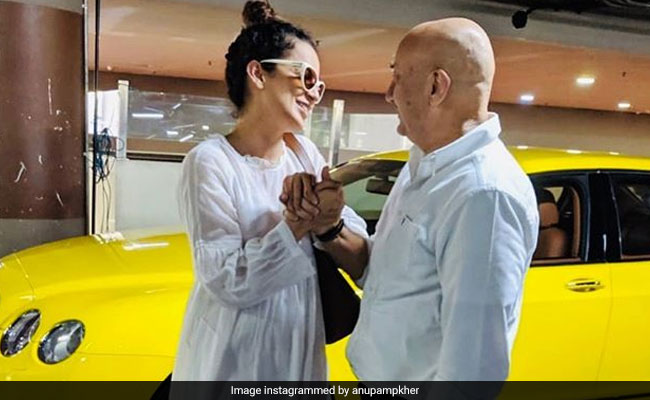 Actress Kangana Ranaut and Anupam Kher bumped into each other at the Mumbai airport on Monday and not just exchanged pleasantries but also adorable comments on Instagram. Glimpses of their chance meeting have been shared by the veteran actor on his Instagram, with these words: "Always a pleasure to meet one and only and my favourite Kangana Ranaut" while the Manikarnika actress returned the favour with a statement on the official Instagram page handled by her team: "It's a pleasure to meet like-minded people who understand the art and are able to match the wavelength. Meeting Anupam Kher ji is the same feeling, always makes my day."

The airport pictures are no doubt cute, no really - Kangana and Anupam Kher greeted each other very warmly.

Always a pleasure to meet one and only and my favourite #KanganaRanaut.

The actress was returning from a yoga retreat in Coimbatore - her airport wardrobe included a spotless linen dress by eka, Gucci shoes and a Stella McCartney tote. Kangana, who unwound at the yoga centre, also hosted a special screening of Manikarnika there.

Earlier this year, Anupam Kher was just one of the few handful actors who jumped to Kangana Ranaut's defence after she was trolled for a behind-the-scenes video from the sets of Manikarnika, in which she was seen shooting a war scene on a mechanical horse. "How much venom this man has against a self-made actress Kangana Ranaut?" read a part of Mr Kher's tweet. Paresh Rawal also supported Mr Kher's views.

How much venom this man has against a self made actress #KanganaRanaut!! This is called ‘acting' idiot. Actors all over the world do that. That is their job. She will be remembered for decades for her hard work in movies. While you got your fifteen minute fame by using her name. pic.twitter.com/y6vRo1eZfu