Raveena Tandon wrote, "Me and my brood! My baby's baby! Countdown has begun." 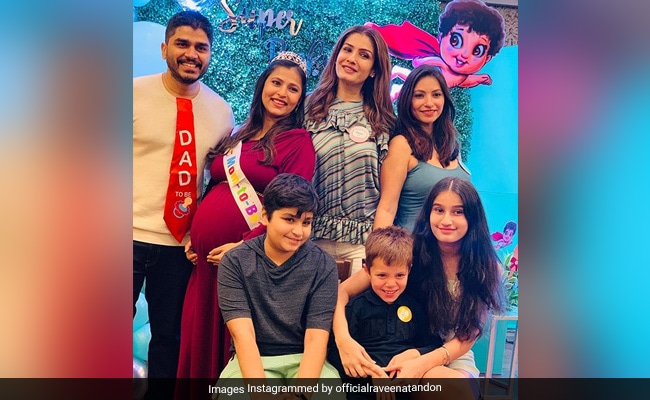 Actress Raveena Tandon hosted a baby shower for her adopted daughter Chhaya over the weekend and inside pictures from the event had sugar, spice and everything nice. "Me and my brood! My baby's baby! Countdown has begun," Raveena captioned the post, in which she shared multiple pictures from the baby shower. Chhaya, dressed in maroon, stood tall with Raveena and her adopted sister Pooja while Raveena's children Rasha and Ranbir (with husband Anil Thadani) also joined them. Chhaya married Shawn Mendes in a Hindu-Catholic ceremony in Goa in 2016. For the Catholic ceremony, Raveena walked Chhaya down the aisle.

For the baby shower held over the weekend, a big family group had assembled to bless the parents-to-be and the baby. Here are pictures from Raveena Tandon's daughter Chhaya's baby shower:

Me and my brood ! My baby's baby! Countdown has begun !! @officialrashathadani

Raveena Tandon adopted Pooja and Chhaya as a single mother in 1995, when they were 11-years-old and 8-years-old, respectively. She married film producer Anil Thadani in 2004 and they are parents to daughter Rasha, 14 and son Ranbir, 11.

Raveena Tandon was among the top crop of actresses in the Nineties and she has featured in films like Patthar Ke Phool with Salman Khan, Dilwale opposite Ajay Devgn, Laadla with Anil Kapoor and Sridevi, Mohra and Khiladiyon Ka Khiladi co-starring Akshay Kumar, Ziddi with Sunny Deol, and Bade Miyan Chote Miyan and Dulhe Raja opposite Govinda.

She won Best Actress National Award for her role in 2002 film Daman.

On the work front, Raveena Tandon recently featured in Kannada film K.G.F: Chapter 2 while her last Bollywood film was Shab, which released in 2017. In the same year she starred in Maatr. Raveena Tandon currently co-judges dance reality show Nach Baliye 9.