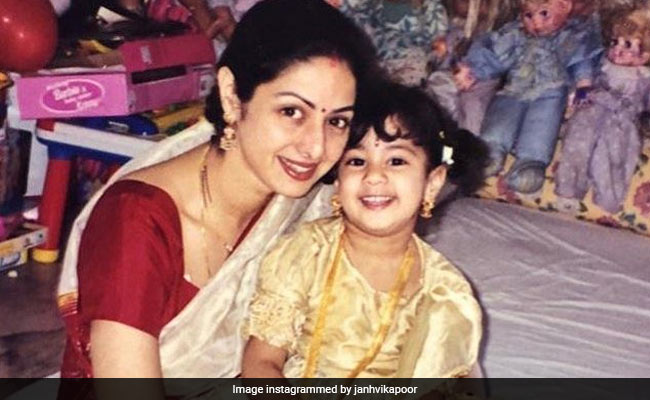 A throwback photo of Sridevi with Janhvi Kapoor (courtesy janhvikapoor)

"Happy birthday, Mumma, I love you": On Tuesday, Janhvi Kapoor marked Sridevi's birth anniversary with a heart-wrenching post that will make you teary-eyed. Sharing a throwback photo of the legendary actress, her 22-year-old daughter remembered Sridevi on an emotional note. Sridevi died in February last year after accidentally drowning at a hotel bathtub in Dubai, just months before Janhvi Kapoor's Bollywood debut. Ahead of Dhadak's release in July, an emotional Janhvi Kapoor was heard saying at events: "I miss her today." Today, in the comments section on Janhvi's powerful post, Sridevi's good friend Manish Malhotra and actress Priyanka Chopra let Janhvi know that Sridevi lives on in their hearts.

Here's what Janhvi Kapoor's Instafam woke up to on Sridevi's birth anniversary. Sridevi would have been 56 today.

Happy birthday Mumma, I love you

Early wishes remembering Sridevi also poured in from Anil Kapoor's wife Sunita Kapoor, who celebrated her bond with Sridevi with a moving note: "Memories are always special. Sometimes we laugh by remembering the times we cried, and we cry by remembering the days we laughed! That's life. Happy birthday Sri, Miss you so much."

Designer Manish Malhotra, who was one of Sridevi's closest friends and shares a fabulous rapport with Janhvi and Khushi, could only write "Miss you" on a post.

The Filmfare Awards this year paid a heartfelt tribute to Sridevi's illustrious career spanning over several decades and 300 films. Sridevi's last onscreen appearance was in Shah Rukh Khan's Zero - her portions were shot before her death. Sridevi was honoured with the Padma Shri, India's fourth highest civilian award, in 2013. After her death last year, Sridevi was posthumously honoured with her first National Award for MOM.