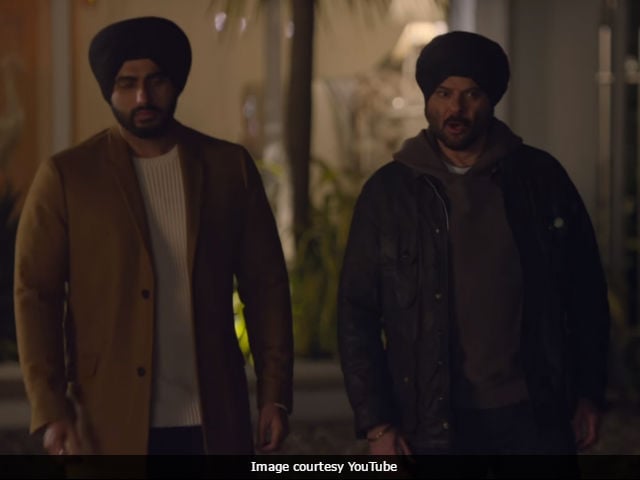 Anil and Arjun Kapoor in Mubarakan

New Delhi: Mubarakan, starring Anil Kapoor, Arjun Kapoor, Ileana D'Cruz and Athiya Shetty, has managed to collect Rs 7.38 crore on its second day, recording a 40.75% growth, reported trade analyst Taran Adarsh. On its opening day, the film received a lukewarm response and earned a total of Rs 5.25 crore. "#Mubarakan jumps on Sat... Records 40.57% growth... Biz should escalate on Sun too... Fri 5.25 cr, Sat 7.38 cr. Total: 12.63 cr. India biz," he tweeted. Mubarakan has been directed by Anees Bazmee. The film narrates the story of a Punjabi family who eagerly wants to get their twins (played by Arjun Kapoor) married. In the film, the 32-year-old actor features as Karan and Charan Singh. Anil Kapoor portrays the role of his onscreen uncle Kartar Singh. See Mr Adarsh's tweet here:

Today, director Anees Bazmee thanked everyone on social media for appreciating his film. "Lots of Love to the audiences, for giving so much love to #Mubarakan. Are yaar aap logon ke liye hi too banai hai, sah Parivaar maza karo, he wrote.

Lots of Love to the audiences,for giving so much love to #Mubarakan. Are yaar aap logon ke liye hi too banai hai ,sah Parivaar maza karo .

Mubarakan marks Anil Kapoor's fifth collaboration with director Anees Bazmee. They have previously worked together in films like Welcome, Welcome Back, No Entry and No Problem.

This is first time Anil Kapoor is sharing the screen space with his nephew Arjun Kapoor.

In his review for NDTV, film critic Saibal Chatterjee wrote that 'Mubarakan tries too hard to tickle our funny bones and the effort shows.'

Promoted
Listen to the latest songs, only on JioSaavn.com
"Mubarakan is generally puerile, occasionally fun, and always unabashedly over the top. It is just the sort of mix of song, dance, comic gags and unbridled lunacy that Bollywood's mass audience so loves. So, there is superhit written all over the film, but this puffy concoction simply isn't for those with a taste for more subtle and easy-flowing humour," Saibal Chatterjee added.