Mouni Roy's Birthday Vacation Pics Are Getting Better By The Day 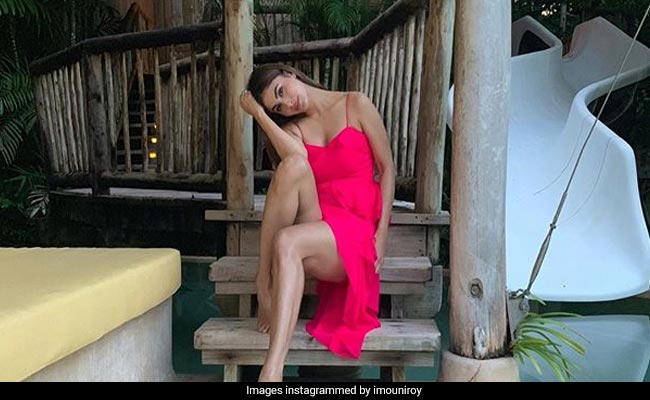 Actress Mouni Roy's birthday celebrations in Thailand have spilled on to become an extended vacation in beach destination. And the 34-year-old actress is giving us major vacation pangs with new pictures from her vacation diaries every day. Mouni Roy, who has been making the most of the sun, the sand and the wind in Thailand, described her current mood as: "Moody because am already burnt," in a recent post. Mouni, pretty as a picture in a pink dress, can be seen adorably posing at what appears to be her villa. In another one, Mouni, dressed in a cute bikini with a knit dress thrown over, can be seen ready to embrace the Thailand waters.

Here's a quick trip through the pages of Mouni Roy's Thailand vacation diaries:

Get in the middle ; I dare you ! #GoFishyGoGoGo #lifeline @discoversoneva

This place is a love song & everybody here s so kind ,so warm ; all heart. Cannot describe in words how peaceful & happy you all have made me here err'yday #sonevakiri @discoversoneva you are so SPECIAL thank you.... #birthdayescape @roshnichopra @nambiar13

While Mouni Roy spent her birthday away from the hustle and bustle of city life, she was showered with wishes on social media. Mouni took out the time to thank everyone for all the love that came her way: "Cathartic tears of joy reading all your birthday wishes and messages. Do not know how to say how grateful I am. Thank you."

Cathartic tears of joy reading all your birthday wishes & msgs. Donot know how to say how grateful I am. Thank you #OfSonnetsSandSunriseNSunsets ... @discoversoneva

Mouni Roy became a household name after starring in Ekta Kapoor's Kyunki Saas Bhi Kabhi Bahu Thi and is also best known for her roles in shows like Devon Ke Dev...Mahadev and Naagin.

Mouni Roy, one of the most popular names in the television world, made her Bollywood debut with 2018 film Gold. She then also starred in John Abraham's 2018 espionage drama Romeo Akbar Walter. Mouni Roy will next be seen in Made In China, co-starring Rajkummar Rao. Mouni Roy will feature as the antagonist in Ayan Mukerji's big budget fantasy film Brahmastra, co-starring Alia Bhatt and Ranbir Kapoor.