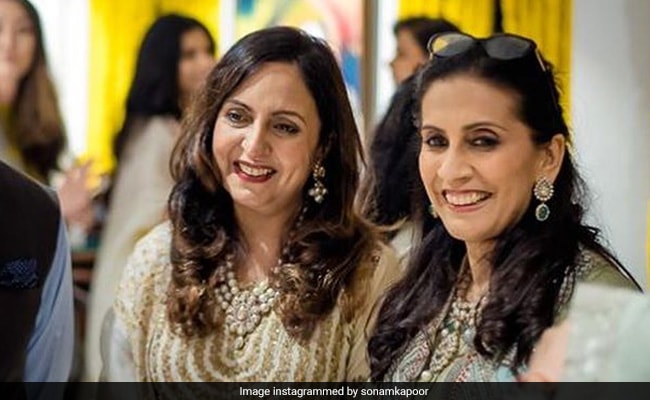 It's raining love on Instagram and let's just say that it is a sheer delight. On the occasion of Mother's Day, Sonam Kapoor shared several posts on her Instagram profile to wish her mother Sunita Kapoor and mother-in-law Priya Ahuja. In one of the posts, Sonam shared a picture of Sunita Kapoor and Priya Ahuja standing together and wrote: "Love you both.. Happy mamas day." In a separate post, Sonam posted a set of lovely pictures with her mother Sunita Kapoor and wrote: "Mama, I love you. Miss you so so much.. I can't wait to see you and hug you tight. Happy Mother's Day." Sunita Kapoor acknowledged Sonam's post and wrote in the comments section: "Miss you lots too. Love you." Sonam Kapoor is currently in New Delhi with her husband Anand Ahuja.

Love you both.. happy mamas day!

Mama I love you. Miss you so so so much.. I can't wait to see you and hug you tight. Happy Mother's Day.. @kapoor.sunita

Meanwhile, she added a few pictures with Priya Ahuja and captioned them: "Happy, happy Mother's Day. Love you. Thank you for loving me unconditionally and being my biggest support."

Happy happy Mother's Day .. love you @priya27ahuja thank you for loving me unconditionally and being my biggest support..

On the work front, Sonam Kapoor was last seen in the 2019 film <>The Zoya Factor, co-starring Dulquer Salmaan and Angad Bedi. Sonam also stared in Ek Ladki Ko Dekha Toh Aisa Laga, alongside Anil Kapoor, Rajkummar Rao and Juhi Chawla, last year. The actress has not announced her upcoming projects as of now.

Anil Kapoor and Sunita Kapoor got married in 1984. The couple first met on the sets of Meri Jung. The couple are parents to actors Sonam Kapoor and Harshvardhan Kapoor, and filmmaker Rhea.