"Blessed to have this humble, kind, charming and wonderful human being with us," Vignesh Shivan wrote for SRK 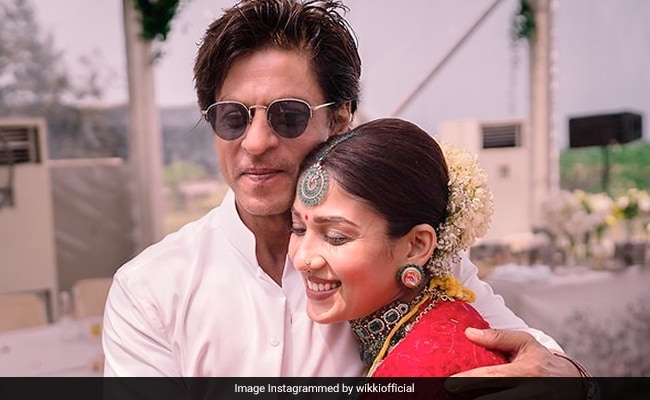 Nayanthara and Vignesh Shivan are celebrating their one month marriage anniversary today with some more star-studded pictures from their wedding. Only this time, the pictures feature Shah Rukh Khan, Rajinikanth, directors Atlee and Mani Ratnam. Shah Rukh Khan gives bride Nayanthara a warm hug in one picture, shared by Vignesh. Another one shows Rajinikanth congratulating the newly-married couple with Mani Ratnam standing beside him. For Shah Rukh Khan, Vignesh's post read: "What more can anyone ask for ! #kingkhan Shah Rukh Khan! Blessed to have this humble, kind, charming and wonderful human being with us during our wedding! The Badshaah and the time wit him! Bliss! Blessed. One month anniversary."

Vignesh also shared pictures with Rajinikanth from the wedding and wrote, "With the loving Thalaivar Rajnikanth sir :) blessing our wedding with his esteemed presence with sooo much of positivity and good will. Happy to share some great moments on the one month anniversary of our special day," and added the hashtags "dreamy moments" and "wikkinayanwedding."

Take a look at the photos below:

Nayanthara and Vignesh, who were dating for a long time, married in an intimate ceremony on June 9 at Mahabalipuram, Tamil Nadu.

Shah Rukh Khan and Nayanthara are collaborating for the first time for director Atlee's Jawan. After her honeymoon in Thailand, Nayanthara was spotted in Mumbai to begin shooting for the project. The first look of Shah Rukh Khan from Jawan was unveiled on June 3. It featured SRK in a grunge, bandaged look. Sharing the teaser on Instagram, the actor wrote, "An action-packed 2023!! Bringing Jawan to you, an explosive entertainer in cinemas 2nd June 2023. In Hindi, Tamil, Telugu, Malayalam and Kannada."

Last year, Nayanthara collaborated with Rajinikanth for the film, Annaatthe.

On Kareena Kapoor's Birthday, Wishes From Malaika And Amrita Arora. Pouts All Around