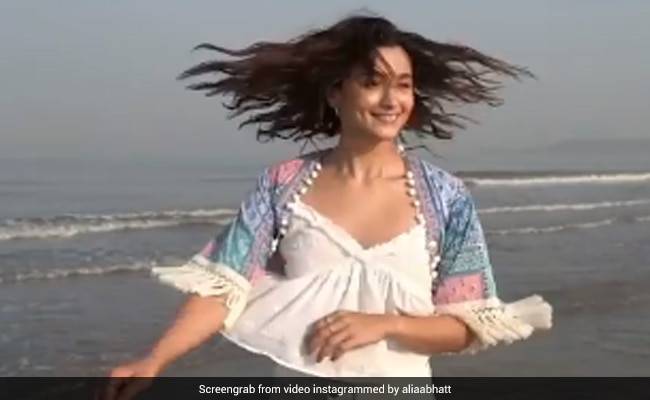 Alia Bhatt in a still from the video. (Image courtesy: aliaabhatt )

Alia Bhatt, who made us all smile today with her then and now post, is back again with another adorable Instagram post. Continuing with the then and now series, the 28-year-old actress shared a pictured and a video on Instagram. While the picture is from Alia's childhood days, the video is from recent times. The picture features little Alia inside a swimming pool, while the video features the actress enjoying by the beach. In the video, Alia Bhatt can be seen twirling with a bright smile on her face as she makes the most out of her day at the beach. She can also be seen kicking the waves in a playful gesture. "And no matter what we do," Alia wrote in the caption of the post and added a sunshine emoji. Needless to say, Alia's post comes packed with loads of cuteness.

Many fans of the actress dropped comments on the post. While some dropped heart emojis, others left comments like "wowww."

Earlier in the day, Alia Bhatt had shared another then and now post featuring a throwback and a recent picture. In the recent picture, Alia can be seen dressed in yellow separates and a cool white hat. She can be seen sitting by the beach. In the throwback picture, we see Alia Bhatt as a kid sitting yet again by the beach. The post received a comment from Alia's rumoured boyfriend, actor Ranbir Kapoor's sister Riddhima Kapoor Sahni.

The two recent posts on the actress' Instagram have well established that Alia Bhatt is a beach baby. Earlier this year, Alia went to Maldives for a vacation and shared postcards on Instagram.

In March, Alia had dropped a stunning picture of herself swimming in a pool. "It was the best day," she wrote in the caption.