The intriguing poster of MOM features Sridevi and Akshaye Khanna, who are seen facing opposite sides. Sridevi captioned the poster as: "Can he be trusted?" 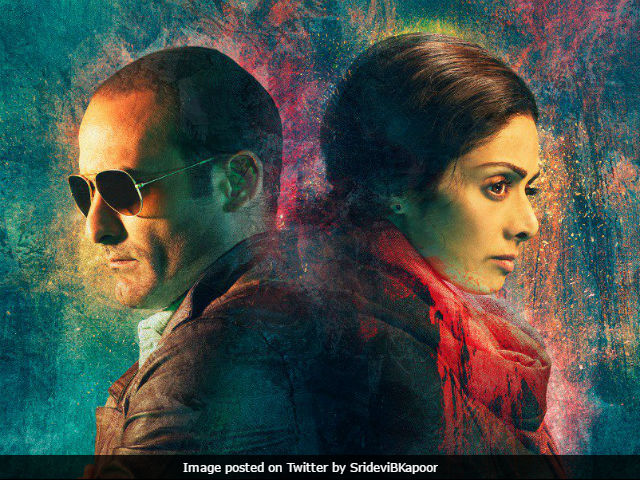 New Delhi: Actress Sridevi is all set to return to the big screen with MOM, directed by Ravi Udyawar. Today, the 53-year-old actress shared a new poster from her upcoming film. The intriguing poster features Akshaye Khanna and the Chandni actress, who are seen facing opposite sides. Sridevi captioned the image as: "Can he be trusted?" MOM has been co-produced by Boney Kapoor, Sunil Manchanda, Mukesh Talreja, Naresh Agarwal and Gautam Jain. In the film, Sridevi will feature as the protagonist, a mother, who is seeking revenge for injustice done to her daughter. See the new poster of MOM shared by Sridevi here:

Can he be trusted? #MOMTheFilm in cinemas 7th July 17. @Nawazuddin_S@ZeeStudios_@MomTheMovie#AkshayeKhannapic.twitter.com/rqJyDXZ02i

On April 1, the makers of the film unveiled the teaser of MOM:

Earlier this month, Nawazuddin Siddiqui shared a poster from the movie in which he looked almost unrecognizable. He captioned the poster as: "Things may not be what they seem. #LooksCanBeDeceptive @MOMTheMovie @SrideviBKapoor @ZeeStudios_(sic)."

In a statement to news agency PTI, the 42-year-old actor said that he agreed to be a part of MOM as he was getting a chance to work with Sridevi. "When I was approached for the film I just couldn't refuse as it was an opportunity to act with Sridevi," PTI quoted Nawazuddin Siddiqui as saying.

Sridevi's last Bollywood venture was Gauri Shinde's English Vinglish. The film was her first movie after a gap of 15 years. She won the Filmfare Best Actress Award for her performance in the movie.

Promoted
Listen to the latest songs, only on JioSaavn.com
In 2015, Sridevi featured in Tamil movie Puli.