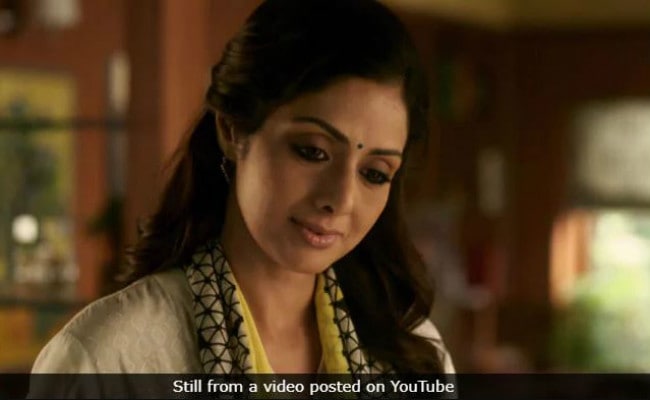 Sridevi's MOM has graphed a slow and steady upwards journey on the box office meter in China. MOM clocked 17 days in theatres across China on Sunday and has raked in a total of Rs 104 crore, reported trade analyst Taran Adarsh. In doing so, MOM has taken the eighth spot on the list of Indian movies, which crossed the $ 15 million (roughly translates to Rs 100 crore) mark in China. "MOM crosses $ 15 million in China... And its 100 not out there [crossed Rs 100 cr]... Mom is now the eighth Indian film to cross $ 15 million in China... Total till 26 May 2019: $ 15 million [Rs 104.28 cr]," he tweeted.

In his analysis for MOM's box office collections in China, Mr Adarsh also added a list of top earning Indian movies in the country. In China, MOM is now in the league of Rs 100-crore-and-not-out films such as Aamir Khan's PK and Salman Khan's Bajrangi Bhaijaan. Taran Adarsh's list also includes Dangal and Secret Superstar, which eventually surpassed the $ 100 million mark in Chinese theatres.

In China, MOM opened to theatres on May 10 with decent numbers and fared instantly better than Hichki, which was running already, and also had a "healthy" first weekend, as told by Taran Adarsh. But after a consistent run at the box office, MOM recorded Rs 98 crore on Friday with its weekend numbers pushing the total to a 100 crore.

MOM released in India in July 2017, a few months after which Sridevi's death shocked the film fraternity and fans. Sridevi was posthumously honoured with her first ever National Award - Best Actress National Award - for the revenge drama last year.