Miss Universe: What Sushmita Sen Wore On The Red Carpet 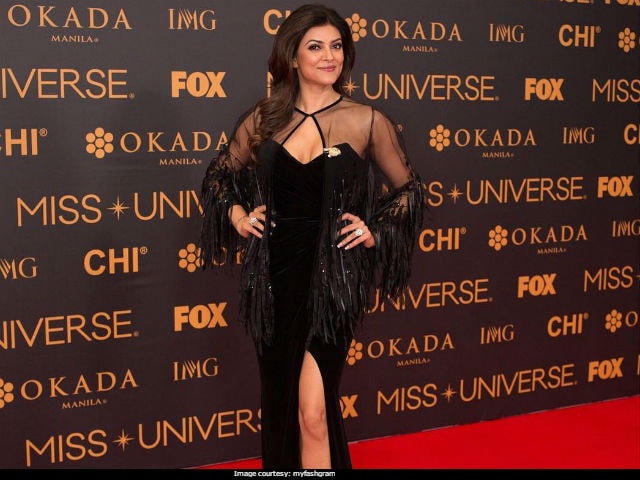 New Delhi: Sushmita Sen returned to the Miss Universe pageant this month, 23 years after she won the title in 1994. Sushmita, 41, was in Manila judging Miss Universe and, ahead of the final round on Monday, was photographed on the red carpet looking fabulous in a in a black ensemble. On the judges panel, Sushmita was accompanied by two other former Miss Universe winners, Dayanara Torres (1993) and Leila Lopes (2011), fashion magazine editor Mickey Boardman, television star Cynthia Bailey and social entrepreneur Francine LeFrak. Iris Mittenaere of France was crowned Miss Universe this year. Sushmita Sen set the red carpet on fire:

During the red carpet photoshoot, a silver hat appeared to be Sushmita's favourite prop. She posed with former Miss Universe winners - Dayanara and Leila - along with actress Cynthia Bailey:

Pictures from inside Manila's SMX Convention Center, where the beauty competition was held, have also been shared on social media:

Sushmita Sen arrived in the Philippines last week ahead of the beauty pageant finale and has Instagrammed memories and videos from the Philippine capital. Sushmita walked the ramp during a rehearsal and captioned her Instagram video: "And I walked this stage one last time with you in my heart! I celebrate you. I always will! Thank you India."

This is what Sushmita posted:

For you #India post our #judge briefing today, got all my co judges (very sporting bunch) up on the #missuniverse2016 stage in #Manila to celebrate the #platform that will change someone's life forever!!! bringing #glory to their #country as they proudly represent it!!! my co judges walked n danced too(videos to follow)And I..walked this stage one last time with YOU in my heart!!!! I celebrate you...I always will!!! THANK YOU INDIA!!!#missuniverse1994

Sushmita received a warm welcome when she arrived in Manila:

What a wonderful treat!!!! meeting my #Indian family in the #Philippines thank you #indianembassy for the warm welcome and also, for making me repeat the answer that won us #missuniverse1994 loved being home!!!! thank you!!! #memories #indian republic day #manila #homecoming

She also Instagrammed a picture of herself on Republic Day:

I love this picture!!!! celebrating 68th Republic Day of India in the #Philippines God bless both our Nations with Unity and prosperity!! An honour to fly both #flags high!!!#moments #homecoming #manila #indianembassy

Ahead of her trip to Philippines, Sushmita Sen shared a note on Instagram. "Getting ready with a dancing heart! I am so excited, emotional and looking forward to returning home to the Philippines after 23 years. It's where it all began," she wrote with a selfie.

Getting ready with a dancing heart!!!!! I am soooooooo excited, emotional and looking forward to returning home to the #Philippines after #23years it's where it all began #manila1994 #missuniverse1994 Life comes a full circle, from winning Miss Universe, to having owned its Indian Franchise to now...returning back to #Manila this time as a #judge at the 65th Miss Universe pageant!!!to all my #filipino friends who have been graciously asking...I can now confirm...yesssssss!!!! I am coming!! Mahal Kita Philippines see u sooooooon!!!!

Promoted
Listen to the latest songs, only on JioSaavn.com
In 1994, Sushmita Sen won the Miss Universe title after pushing Aishwarya Rai to second place in the Miss India pageant. Sushmita made her debut in Bollywood with Mahesh Bhatt's 1996 film Dastak. Sushmita has also played significant roles in films like Biwi No 1, Bewafaa and Maine Pyaar Kyun Kiya? , Zindaggi Rocks, Do Knot Disturb and No Problem.