Sonam Kapoor shared an adorable picture of herself with sister Rhea 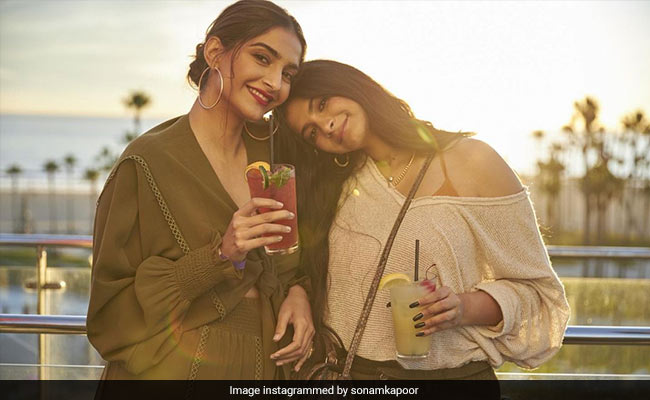 Actress Sonam Kapoor who is currently living with her husband and fashion designer Anand Ahuja in London, on Tuesday, shared a new picture with her sister Rhea Kapoor on Instagram. In the picture, the celebrity sisters can be seen posing with a glass of mocktail each in their hands. While Rhea can be seen resting her head on Sonam's shoulder in the picture, Sonam can be seen resting her head affectionately on Rhea's head. Both the sisters look drop dead gorgeous in the picture. Expressing how much she misses her sister, Sonam wrote: "Miss this face, Rhea Kapoor," in the caption of the post.

The two sisters are very close to each other. Besides, sharing a loving sibling bond, they are also business partners as they jointly run a fashion label Rheson. The fashion label was launched in 2017.

Sonam Kapoor got married to London based fashion designer Anand Ahuja in 2018. Anand owns a fashion label by the name of Bhaane.

Earlier last week, Sonam shared a lovely birthday post for her mother Sunita Kapoor on her 56th birthday. She shared few solo pictures of her mother and some pictures of herself with her mother on Instagram. "Love you mama, I hope I see you and hug you soon.. I miss you and love you lots," she wrote in the caption of the post.

In terms of work, Sonam Kapoor was last seen in the film The Zoya Factor. The film was released in 2019 and it co-starred Dulquer Salmaan.