"Hope I See You And Hug You Soon," Sonam Kapoor, Currently In London, Writes For Mom Sunita On Her Birthday

"For everything I am today, my mother's love showed me the way," wrote Sonam in her post for mom Sunita Kapoor 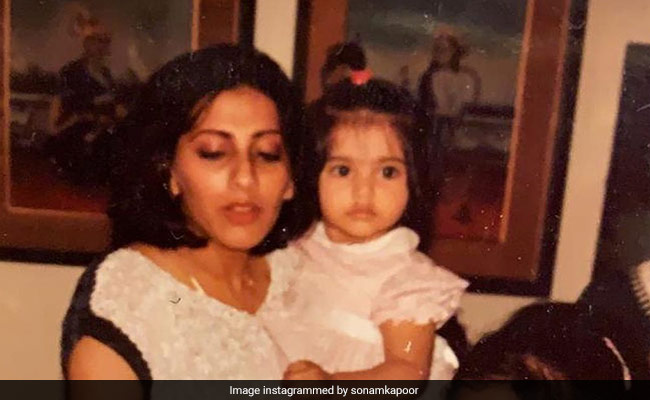 On mom Sunita Kapoor's birthday, Sonam Kapoor lit up Instagram with heart-warming photos and a special note for her. Sonam is currently in London with her husband Anand Ahuja while Sunita Kapoor lives with her husband, actor Anil Kapoor, in Mumbai. On early Thursday, Sonam picked a few pictures of herself and her mom from their family album and one of them happens to be from the actress' childhood. Sharing the pictures that also feature Sonam's sister Rhea and dad Anil Kapoor, the actress borrowed a few lines from a short poem written by Karl Fuchs: "'Mother' is such a simple word, but to me there's meaning seldom heard. For everything I am today, my mother's love showed me the way.' KARL FUCHS. Love you mama, I hope I see you and hug you soon."

"Miss you and love you lots. Happy happy birthday!" Sonam Kapoor added in her post.

Check out Sonam Kapoor's birthday wish for her mom here:

Last year too, Sonam Kapoor wasn't there to celebrate mom Sunita's birthday in Mumbai. Sonam was in Delhi with Anand Ahuja but she made sure to send a whole lot of love to her mom on her birthday. The actress posted a picture of themselves twinning in black outfits and wrote: "Happy, happy birthday my mama. I miss you so much. I wish I was there while you cut your cake and I wish I could get your hugs. I love you and I'll see you soon."

In terms of work, Sonam Kapoor was last seen in The Zoya Factor, in which she shared screen space with Dulquer Salmaan.