Dressed in a mini skirt and an oversized shirt, Mira is giving major goals here 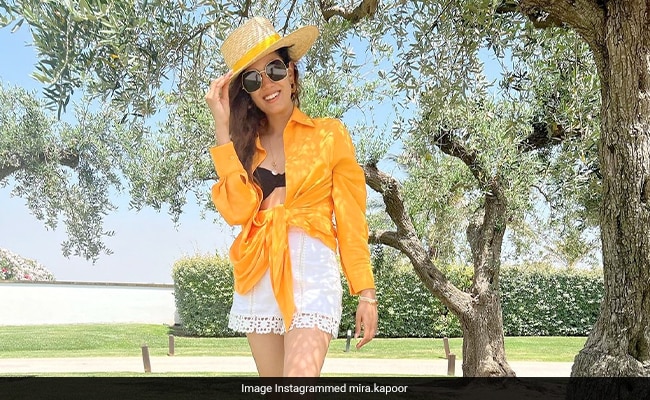 And, we have another page from Mira Rajput's travel diaries. Excited, already? Mira is currently in Sciacca, Italy. And, the pictures from her day out are oh-so-amazing. Dressed in a mini skirt and an oversized shirt, Mira is giving major goals here. Well, well, if you are thinking that it can't get any better we suggest you must go through her caption. It's all the more relatable. Read it. “Beaches and peaches. It's my jam”. Why jam, wondering? It seems she is referring to one of the pictures shared by her in this album. It features a variety of jam jars kept in a line.

Mira Rajput's fans, as always, couldn't keep calm and they have flooded the comment section with fire, red hearts and love-filled comments. A person called her “gorgeous.” Another said, “Never ever imagined a beach outfit with Kolhapuri chappals.”

Mira Rajput announced her arrival in the city of Sciacca with a “Buon Giorno” post. Here, she is chilling by the beach in an easy-breezy dress. Next, we see her posing with a bunch of flowers. We also got a glimpse of her food tails.

Shahid Kapoor has also shared snippets from the family holiday. Along with a picture-perfect frame featuring himself, wife Mira Rajput and their kids, Shahid wrote, “The heart is always full when you are with the ones who matter most. Unconditional pure and basic. Be with those who make your heart full. Always got your back my hearts”.

Shahid Kapoor was last seen in the sports drama Jersey. The film, directed by Gowtam Tinnanuri, also featured Mrunal Thakur and veteran actor Pankaj Kapur. Jersey is a Hindi remake of the Telugu film of the same name. It starred Nani in the lead role. After multiple delays, Jersey was released on April 22.