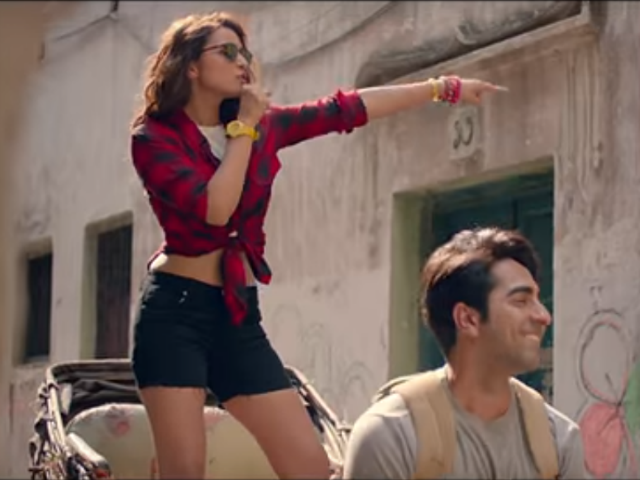 A still from the third trailer of Meri Pyaari Bindu

New Delhi: The third chapter of Meri Pyaari Bindu, starring Ayushmann Khurrana and Parineeti Chopra is out, titled Kalkatte Ki Madonna. The one-and-a-half minute video shared on YouTube, focuses on Parineeti aka Bindu's passion for singing and how Abhimanyu, played by Ayushmann supports her in her journey to become a rockstar and gets 'trapped.' Meri Pyaari Bindu, which has been shot in Kolkata, features Ayushmann Khurrana as a Bengali author. The third trailer from the movie has the popular song Disco '82 song from the movie Khud-Daar playing in the background. The film, directed by Akshay Roy, is scheduled to release in theatres on May 12.

The first two chapters of the film, titled Samosa Aur Chutney and Gabar Aur Sambha were released on Monday and Tuesday, respectively. The makers of the film have promised to release five chapters from Abhimanyu Roy's book, in the form of trailers.

Watch the first two chapters of Meri Pyaari Bindu below:

The makers of the film released the first song from the movie, titled Mana Ke Hum Yaar Nahin, even before the trailers. Parineeti Chopra made her debut as a playback singer with this song. Mana Ke Hum Yaar nahin crossed over 4 million views in a day. The 28-year-old actress received a lot of appreciation from her cousin Priyanka Chopra, Golmaal Again co-stars and other close friends.

Promoted
Listen to the latest songs, only on JioSaavn.com
Parineeti Chopra was last seen in 2014 movie Kill Dil.