Meet Parineeti Chopra, The Seafarer, Being Fabulous In Cruise Photoshoot 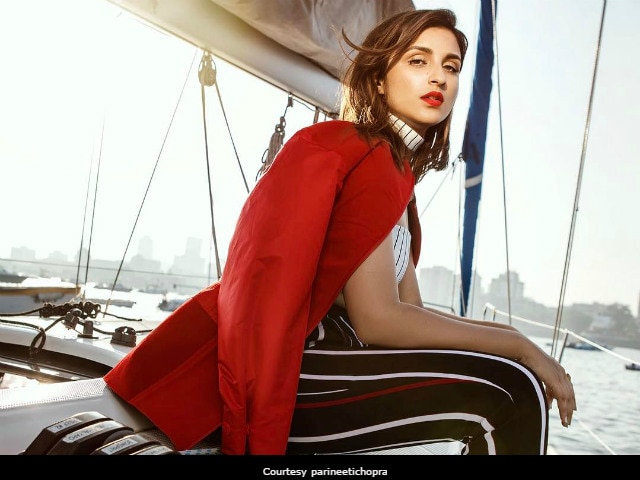 Parineeti Chopra from the photoshoot of a magazine (courtesy: parineetichopra)

New Delhi: Actress Parineeti Chopra indulged in a new photoshoot recently and we simply love the results. Parineeti shared pictures from the shoot on Instagram and the Internet is having a meltdown of sorts. Justified. Parineeti, who stars as the cover girl of Cosmopolitan's April issue, features in vacation wear as she poses on a cruise. Her sailor-like looks are complemented with a black hat and the beautiful setting of the sea, sun and sky. "Someone just put me on a boat already," said Parineeti in one of the captions. For another picture, Parineeti wrote: "Anyone who knows me, knows I was born to be in the ocean! For now, posing on top of it." Shot by fashion photographer Errikos Andreou, the courtesy for Parineeti's hair and make-up goes to international artist Marianna Mukuchyan.

The various shades of Parineeti Chopra when at sea:

Anyone who knows me, knows I was BORN to be in the ocean!! For now, posing on top of it This month's Cosmo Cover Girl :) @cosmoindia

Someone just put me on a boat already!! #OceanCraving Thanks @cosmoindia for this month's cover I love it!!! @errikosandreou @marianna_mukuchyan

The gorgeous @parineetichopra for Cosmopolitan April 2017. Hair and make up by @marianna_mukuchyan styling by @amandeepkaur87

Parineeti Chopra features as the "Cosmo Girl" a month ahead of her upcoming film Meri Pyaari Bindu. Parineeti, who is known for being the bubbly personality she is, stars as the lively, happy-go-lucky Bindu in the film, which also casts Ayushmann Khurrana. The actor-singer features as Bengali author Abhimanyu Roy, Bindu's childhood lover and partner in crime.

Promoted
Listen to the latest songs, only on JioSaavn.com
In the magazine's cover story, Parineeti makes certain revelations from when she was obese. In December 2015, Parineeti Chopra revealed her toned look after she took a break from her career in films, following her back-to-back box office duds - Daawat-e-Ishq and Kill Dil. Talking about her wright loss regime, she told NDTV last year: "I was always thinking about food. So, it took a lot of mental strength to lose all the extra weight. Now, I feel more energetic on the set and it's helping me a lot."