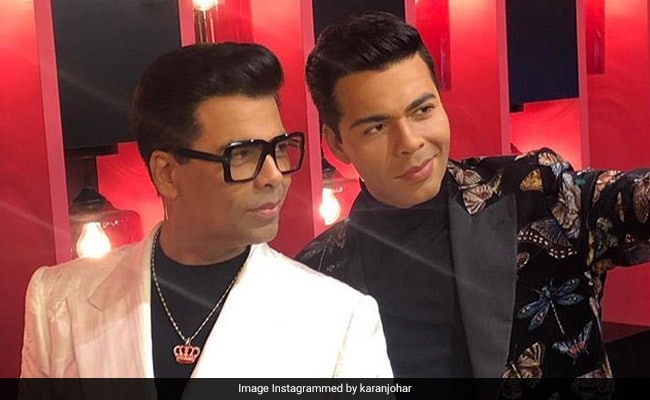 Karan Johar is the first Indian filmmaker to check in to Madame Tussauds! He just unveiled his wax statue at Madame Tussauds Singapore and shared photos of himself and his doppelganger with the caption: "waxed!" LOL. Only Karan Johar can come up with such captions. At the unveiling of his wax statue in Singapore, Karan Johar was accompanied by his mother Hiroo Johar, his family and also got a "surprise from friends who are too shy to be named!" Karan Johar's wax statue shows the fun side of the director - him taking a selfie. "Congrats, congrats, congrats," wrote Kajol on KJo's post while Shweta Bachchan Nanda added: "Congratulations, Karan!"

Others who cheered for Karan Johar on Instagram include Malaika Arora, Farah Khan, Manisha Koirala, Punit Malhotra, Sophie Chowdry, Bhavna Panday and others. Earlier, Abhishek Bachchan had also congratulated KJo on Twitter: "This is so fantastic. Congratulations KJ and well done. So well deserved."

WAXED!!! At @mtssingapore #madametussauds !! What fun with my mom @hiroojohar and my family!!!!! @anushkaskhanna @priyankaskhanna #masi #payal and my surprise from friends who are too shy to be named!!!

At Madame Tussauds Singapore, Karan Johar also inaugurates a new arena dedicated to celebrating Indian cinema. News agency IANS reports that an area of 2,500 square metre has been equipped with interactive technology like AR, Kinect, Hologram and special effects. Visitors can dance and act their way into the hall of fame amidst the wax figures of Indian celebrities.

Not a fan of coffee?? But not with @karanjohar's Koffee because he will definitely brew to perfection! ;) Join us at the opening of Ultimate Film Star experience on 4th of April. Just 3 more days! #MadameTussaudsSG #KaranAtMTSG #UltimateFilmStar #UltimateFilmStarExperience

Now, if you are wondering who all you can spot at Madame Tussauds Singapore other than Karan Johar, we got you covered. KJo's wax figure joined the league of Anushka Sharma and Mahesh Babu. Meanwhile, stars such as Amitabh Bachchan, Sachin Tendulkar, Shah Rukh Khan, Salman Khan, Aishwarya Rai Bachchan, Katrina Kaif and Deepika Padukone already have their wax statues at Madame Tussauds London.