KJo has dropped a heartwarming picture featuring himself and Zoya 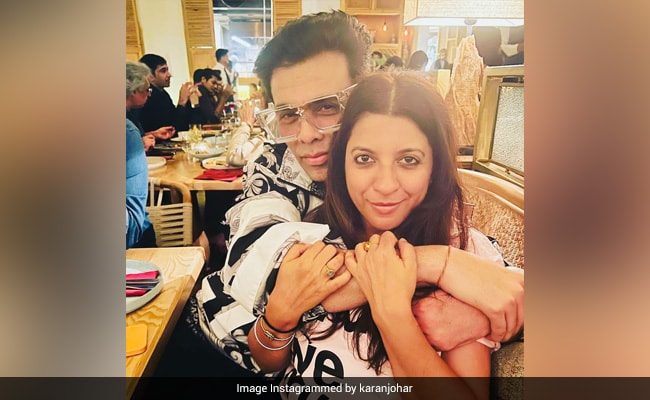 Karan Johar has shared a special post for his “favourite filmmaker” on Instagram. No prizes for guessing. We are talking about Zoya Akhtar. KJo has dropped a heartwarming picture featuring himself and Zoya along with an equally adorable note. It read, “My friend forever. #grewuptogether #favouritefilmmaker...Love you.”Among the first to drop a comment under the post was actor Ranveer Singh. He wrote, “My Loves.” Ranveer is part of Karan Johar's comeback filmRocky Aur Rani Ki Prem Kahani. Ranveer and Zoya have worked together in Dil Dhadakne Do.

Not just Karan Johar, Zoya Akhtar has also dropped an adorable post dedicated to their special bond. Sharing a cute selfie, she wrote, “Saturday” and added the hashtags, “Once in a while selfie” and “old friend gold friend.” Replying to the post, KJo said, “Love you, Zo.”

Meanwhile, Karan Johar is super busy with Rocky Aur Rani Ki Prem Kahani. The film stars Ranveer Singh and Alia Bhatt in lead roles. Jaya Bachchan, Shabana Azmi, and Dharmendra are also part of the project. It will hit the theatres on April 28 next year. At the time of announcing the release date, KJo wrote, “My heart is filled with excitement and gratitude…Rocky Aur Rani Ki Prem Kahani releasing in cinemas near you on April 28, 2023.” The announcement note read, “After 7 years, it's time for me to return to my first home - the cinemas. I had the absolute honour of working with not one, but many illustrious actors on the set of my film. The familial nostalgic feeling of an ensemble cast, creating music that captivates the hearts and a story that runs deep to the roots of our family traditions. It's that time again -to huddle with your family and friends, buy popcorn and witness just sheer love and entertainment unfold on the big screen. We're overwhelmed and impatiently excited to finally inform...Rocky Aur Rani Ki Prem Kahani in cinemas on April 28, 2023.”

Karan Johar is also gearing up for the release of Vicky Kaushal's Govinda Naam Mera.