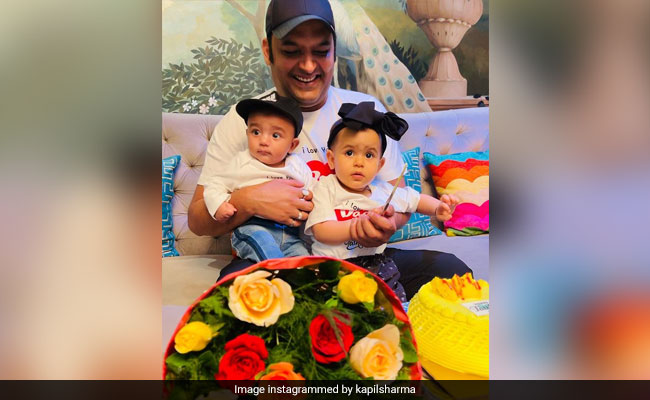 Kapil Sharma couldn't have picked a better occasion than Father's Day to introduce his son Trishaan to the world. On Sunday night, the comedian shared a super cute picture of himself along with his daughter Anayra and son Trishaan. The actor's smile in the picture says it all. Kapil Sharma captioned it: "Public ki purzor maang par Anayra aur Trishaan pehli baar ek saath (On public demand, Anayra and Trishaan for the first time together)." He added the hashtags #happyfathersday, #fathersdaycelebration, #love, #gratitude, #family, #kids to hiss post. Singer Neeti Mohan, who recently welcomed a baby boy, commented on the post: "Pahji apna junior is ditto you."

In February, Kapil Sharma made the baby announcement with this post: "Namaskaar! We are blessed with a baby boy this early morning, by the grace of God. Baby and mother both are fine, thank you so much for all the love, blessings n prayers. Love you all - Ginni and Kapil."

Namaskaar we are blessed with a Baby boy this early morning, by the grace of God Baby n Mother both r fine, thank you so much for all the love, blessings n prayers love you all ginni n kapil #gratitude

Kapil Sharma married Ginni Chatrath as per Hindu and Sikh traditions in Jalandhar in December, 2018. The couple later hosted two grand receptions - in Amritsar and in Mumbai. The Mumbai reception was a star-studded affair. In 2019, he announced the news of his daughter Anayra's arrival on social media.

Kapil Sharma is best-known for hosting the popular television talk show The Kapil Sharma Show. He stepped in the TV industry with The Great Indian Laughter Challenge (season 3). Kapil made his Bollywood debut with Kis Kisko Pyaar Karoon and he dubbed for the Hindi version of The Angry Birds Movie 2. He will soon feature in a Netflix special.

Rubina Dilaik's Note For Husband Abhinav Shukla Is All About Love