Manmarziyaan witnessed growth over the weekend 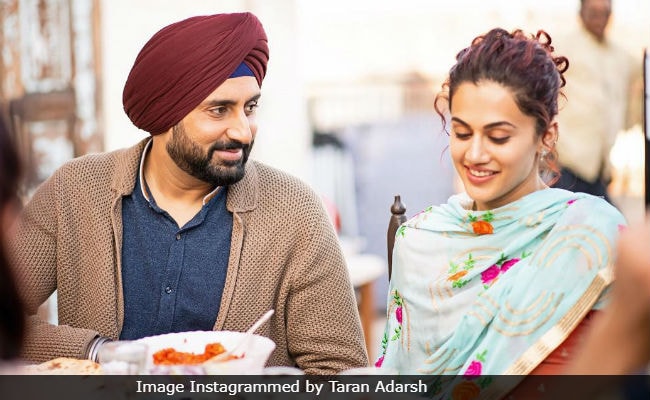 Abhishek Bachchan and Taapsee Pannu in a still from Manmarziyaan. (Image courtesy: taranadarsh )

Anurag Kashyap's Manmarziyaan has managed to collect Rs 16.43 crore within four days of it's release, reports Bollywood trade analyst Taran Adarsh. In his tweet, Mr Adarsh mentioned that the film's performance at the box office wasn't very impressive and that it's business "remained on the lower side" on Monday as it managed to collect merely Rs 2.10 crore. However, the film witnessed slight growth over the weekend as it collected Rs 5.11 crore and Rs 5.70 crore on Saturday and Sunday respectively. Reporting of the film's box office performance so far, Taran Adarsh tweeted: "Manmarziyaan remains on the lower side on Day 4 [Mon]... Fri 3.52 cr, Sat 5.11 cr, Sun 5.70 cr, Mon 2.10 cr. Total:16.43 cr. India biz."

Manmarziyaan might not have performed exceptionally well at the box office but the film opened to good reviews. In his review for NDTV, film critic Saibal Chatterjee gave the film 3 stars out of 5. He praised Taapsee Pannu for her impressive portrayal of Rumi and wrote: "There is much to love in Marmarziyaan. Taapsee Pannu makes it consistently watchable and Anurag Kashyap's directorial flourishes lend the film a veneer of intelligence. Laced with humour and warmth, Manmarziyaan is a love story with flashes - only flashes, not a sustained flow - of inspiration."