Mandira Bedi Introduces Daughter Tara: "She Has Come To Us Like A Blessing"

"Four years and a bit... with eyes that sparkle like stars... sister to her Vir. Welcoming her home... With open arms and pure love," wrote Mandira Bedi 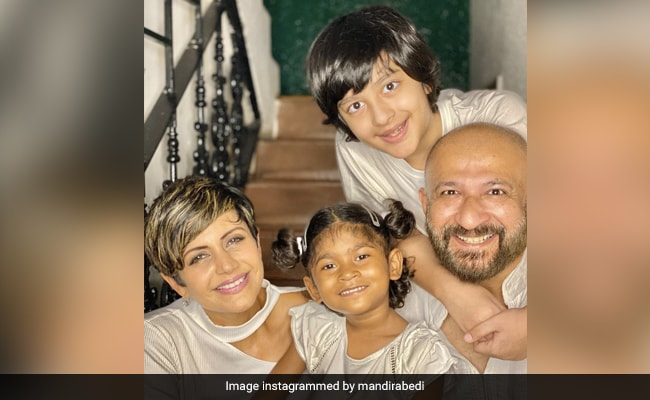 Actress-model Mandira Bedi introduced her daughter Tara Bedi Kaushal in a heart-warming Instagram post on Sunday. Mandira and her husband Raj Kaushal, who previously revealed they wanted to adopt a daughter, welcomed 4-year-old Tara into the family in July. Mandira Bedi and Raj Kaushal are also parents to 9-year-old son Vir. Sharing a photo of her daughter Tara for the first time on social media, Mandira wrote: "She has come to us... like a blessing from above... our little girl, Tara. Four years and a bit... with eyes that sparkle like stars... sister to her Vir. Welcoming her home... With open arms and pure love."

Mandira Bedi said she is "grateful, thankful, blessed" to have welcomed Tara into the family. "Tara Bedi Kaushal became a part of our family on July 28, 2020," the 48-year-old actor added.

She has come to us Like a blessing from above Our little girl, Tara. ⭐️ Four years and a bit With eyes that sparkle like stars Sister to her Vir ❣️ Welcoming her home With open arms and pure love Grateful, thankful. blessed 🙏🏽 Tara Bedi Kaushal ❣️ Became a part of our family on 28th July 2020.

In an interview with Hindustan Times last year, Mandira Bedi revealed that she has applied for the adoption procedure, hoping to welcome a daughter into her family sometime soon. "Raj and I wanted a sister for Vir. My son is eight and we are looking at adopting a girl who could be between two-and-a-half to four-years-old. We have already thought of a name for her. We are going to call her Tara," she said.

Mandira Bedi and Raj Kaushal got married in 1999 and they welcomed son Vir in 2011. In a talk show last year, Mandira revealed that she was "looked at differently" when she decided to have a baby a decade after she got married: "Living in Indian society, as a woman you tend to face several stereotypes. When I decided to delay my pregnancy due to work commitments, it was the most difficult decision I had to make. I was looked at differently, and people perceived me as a woman who is career-oriented."

Mandira Bedi has featured in television shows like CID, 24 and Kyunki Saas Bhi Kabhi Bahu Thi and is best-known for her titular role in Shanti. She has also hosted shows such as Fame Gurukul, Indian Idol Junior and India's Deadliest Roads.