Tamannaah Bhatia was not hurt and hasn't released a statement yet 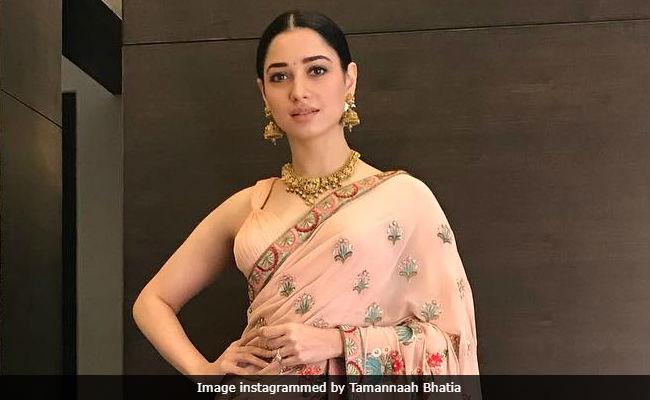 New Delhi: A man has been detained in Hyderabad for allegedly throwing a shoe at actress Tamannaah Bhatia, local police told news agency PTI. The 31-year-old man allegedly aimed the shoe at Tammannah, who was inaugurating a jewellery store in the city, because he was "frustrated by her recent choice of films," PTI reports. Tamannaah, 28, starred in the blockbuster Baahubali: The Conclusion last year, as well as Anbanavan Asaradhavan Adangadhavan and Sketch. Her line-up for this year includes Telugu films Naa Nuvve and Queen Once Again, Khamoshi in Hindi and the Marathi language ABC. It's unclear which of these films has 'frustrated' the man enough to allegedly hurl a shoe at her. He missed.

"The footwear missed its target, while it hit an employee of the jewellery store. (The man) was immediately detained and during questioning revealed that he was apparently frustrated over the roles played by the actress in her recent movies," Inspector B Ravindar of Narayanguda Police Station told PTI.

Tamannaah Bhatia, who is active on social media, has not addressed the alleged shoe throwing. Her only post on Instagram since the news went viral is an update on healthy eating.

Pesto sauce with veggies!! my nutritionist @rashichowdhary always asks me to add some good fats into my veggies so my skin stays fresh and bright! you also absorb all the nutrients more efficiently with more fat. #fitgirlseatfat

Tamannaah debuted on the big screen when she was all of 15. Her first film was Chand Sa Roshan Chehra (Hindi), which tanked at the box office but her Telugu and Tamil film debuts were commercially successful. Sri, Racha and Rebel are among her popular Telugu films. She has featured in Tamil films such as Kedi, Kanden Kadhalai, Paiyaa and Devi.

Tamannaah also starred opposite Ajay Devgn in 2013's Himmatwala, which tanked at the box office. She followed it up with Humshakals and Entertainment. The record-breaking Baahubali series, in which Tamannaah plays Prabhas' love interest Avanthika, are undoubtedly the biggest films of her career.

Promoted
Listen to the latest songs, only on JioSaavn.com
Her upcoming film Queen Once Again is the Telugu remake of Kangana Ranaut's Queen. Hindi film Khamoshi co-stars Prabhu Deva and Bhumika Chawla.