Nothing much to see here, just Malaika Arora being extra because "Guts" 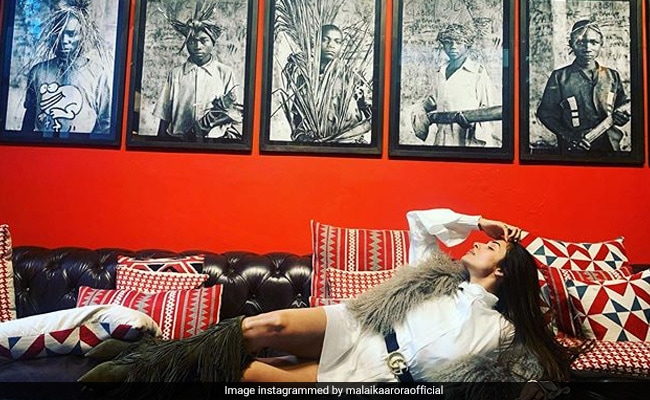 Malaika Arora, who just returned from a mini vacation in Morocco, was spotted chilling again. It's a Thursday, Malaika. C'mon, don't do this to us. We are still a day away from TGIF feels but Malaika Arora is in a lounging kind of a mood. Sharing a photo of her "casually lounging" photo on Instagram and added a caption with millennial lingo: "Yes jus, lounging around very casually. Guts," she wrote along with the ROFL emojis. Malaika actually cracked a self-directed joke as she's being super extra in the photo. Instead of sporting loungewear, Malaika was super chic in a white shirt dress paired with a faux fur jacket, a glitzy belt and frilled boots.

Malaika's expression says it all. Take a look at Malaika's post here:

Malaika's photo appears to be from her Marrakesh diaries, as she was spotted on the Moroccan streets looking like this: "Sukh in a souk," she captioned her post.

Sukh in a souk #marrakech @preetasukhtankar

Earlier, Malaika shared a glimpse of her weekend ride. Just want to say, love her outfit.

Malaika Arora often trends for her Instagram posts and for stepping out with boyfriend Arjun Kapoor in Mumbai. Ahead of Morocco, Malaika checked into her New Year vacation with Arjun and shared this loved up photo.