Ranbir Kapoor reportedly traveled with team Brahmastra only till London, where he met Mahira Khan 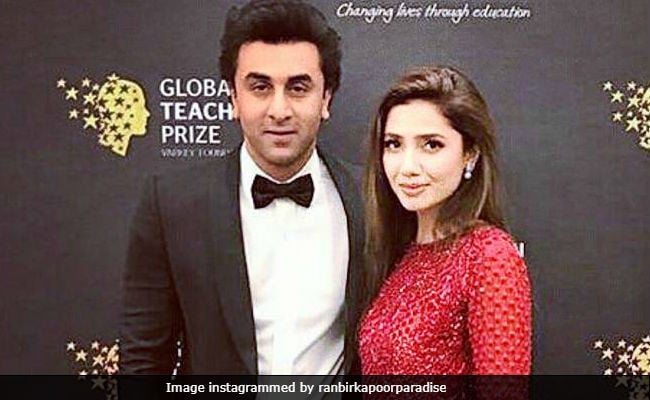 Ranbir Kapoor and Mahira Khan at an event in Dubai. (Image courtesy: ranbirkapoorparadise)

New Delhi: Ranbir Kapoor and Mahira Khan are trending again - this time for their reported secret meeting in London. A SpotboyE report states that team Brahmastra - director Ayan Mukherji and actors Alia Bhatt and Ranbir - was travelling from Bulgaria to India but Ranbir Kapoor got off at London's Heathrow Airport, where the flight had a layover. SpotboyE's 'reliable source' said that Ranbir Kapoor met Mahira Khan, who was promoting her film Verna and was a guest on BBC talk show HARDtalk with host Stephen Sackur. As of now, no pictures of Mahira and Ranbir have found their way onto the Internet to corroborate the source's information.

SpotboyE report also added that after their brief rendezvous, Mahira Khan left for Pakistan where she had to attend a friend's wedding celebration while Ranbir extended his stay for Brahmastra preparations. After training with Ido Portal, who is an Israeli "movement coach," Ranbir Kapoor is all set to learn Indian martial arts forms Kalaripayattu and Varma Kalai for the fight sequences in Brahmastra.

Ranbir Kapoor and Mahira Khan trended after pictures and video of them on the red carpet of the Global Teacher Prize Ceremony went viral in March last year. This was followed by the pictures of them smoking outside a New York hotel, which triggered dating rumours. The Internet was not thrilled and trolled Mahira for smoking and wearing a semi-backless dress.

Promoted
Listen to the latest songs, only on JioSaavn.com
Speaking to HARDTalk host Stephen Sackur during her recent London trip, Mahira said: "One, obviously you feel violated, you are in a personal down time moment and someone has just photographed you," reports news agency IANS. Ranbir Kapoor had also released a statement after their New York pictures went viral. He said: "I've gotten to know Mahira in a personal capacity over the last few months. She is somebody who I admire and respect, for her achievements and even more for the person she is. It is very unfair the way she is being judged and spoken about."

Mahira Khan became a household name in India after her show Humsafar aired on the small screen. She made her Bollywood debut opposite Shah Rukh Khan in Raees. Ranbir Kapoor was last seen in Jagga Jasoos and his upcoming films are the Sanjay Dutt biopic and Brahmastra.