Andy Roberts was a fast bowler, who played for West Indies in Test cricket 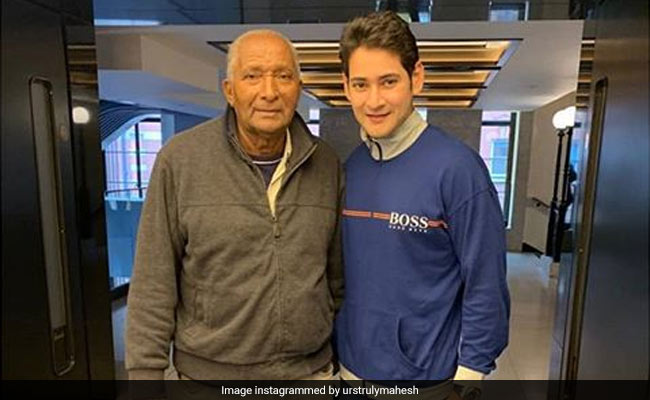 Telugu actor Mahesh Babu, who is currently enjoying the success of his film Maharshi, shared a special "fanboy" moment with us on social media. The 43-year-old actor met West Indies cricketing legend Andy Roberts and added a memory of his meeting with the cricketer to his Instagram diaries. Mahesh Babu, who is currently in London with his family, posted several pictures of himself enjoying the India-Australia match with his son Gautam Ghattamaneni from The Oval, a cricket stadium located in Kennington (south London). Sharing a photo with Andy Roberts, Mahesh Babu wrote: "With the legend himself... Andy Roberts... Huge fanboy moment."

For those who don't know, Andy Roberts was a fast bowler, who played for West Indies in Test cricket.

But first, take a look at Mahesh Babu's post:

With the legend himself... Andy Roberts... huge fanboy moment

In his previous post, Mahesh Babu shared a panorama picture of himself enjoying the epic India-Australia match of World Cup 2019 at The Oval. The Indian team won that match by 36 runs and marked their second victory in the ongoing World Cup. Sharing his photo from the stadium, Mahesh Babu wrote: "Unbelievable energy at The Oval... Just awesome!"

In a separate post he shared earlier, Mahesh Babu could be seen watching the India-Australia match with his son. "This one's for my boy... Gautam. #INDvAUS... The Oval," he captioned his post. Mahesh Babu's wife Namrata Shirodkar also accompanied the duo and shared an adorable video of her son cheering Team India at The Oval. Posting the video, Namrata wrote: "My darling enjoying his match at The Oval."

This one's for my boy.. @gautamghattamaneni #INDvAUS @ The Oval

Namrata also shared several pictures where she could be seen posing with Mahesh Babu, Gautam and director Vamshi Paidpally, who has helmed Mahesh's recently released Maharshi.

Surprise guest in our stands !!#indvsaus2019

On the work front, Mahesh Babu was last seen in Maharshi, which emerged as a box office hit. He has also signed an untitled film with Baahubali director SS Rajamouli.