The teaser of Bharath Ane Nenu tracks Bharath's ambitious journey in the political sphere - from his early days as a politician to the day when he assumes office as the Chief Minister, the teaser has glimpses of it all 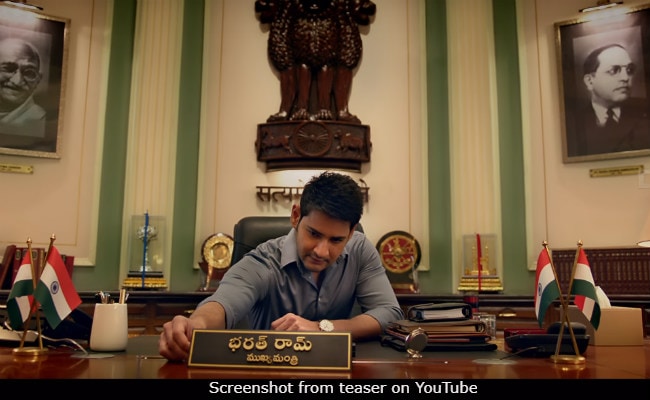 New Delhi: Telugu superstar Mahesh Babu dropped the new teaser of his upcoming political thriller Bharath Ane Nenu, in which he plays the role of an honest, determined and hard-working Chief Minister of Andhra Pradesh. In no time, the teaser went viral and is one of the most trending videos on YouTube. "When I was a kid, my mom told me something - 'If you make a promise, and don't stand by it, you're not called a man.' I stood by it and lived by it," these are the words of Bharath Ram with which the teaser starts. The brief video tracks Bharath's ambitious journey in the political sphere - from his early days as a politician to the day when he assumes office as the Chief Minister, the teaser has glimpses of it all.

The teaser of Bharath Ane Nenu has also infused a little bit of action (why not, it's Mahesh Babu after all) as Bharath makes the "biggest promise" to his people. And now, the bigger challenge is to keep his word. Will Bharath be successful in his mission? For that, you have to wait till April - that's when the film is expected to hit theatres.

Shared on Tuesday evening, the teaser garnered over five million views in half a day. On Wednesday morning, it found itself on the third spot on the list of YouTube's trending videos.


Promoted
Listen to the latest songs, only on JioSaavn.com
Apart from Mahesh Babu, Bharath Ane Nenu also includes names like Tamil actor Sarath Kumar, who plays the protagonist's father. Kiara Advani also makes her Telugu debut with the film. Bharath Ane Nenu has been directed by Koratala Siva and the movie marks the actor-director duo's second collaboration after 2015's Srimanthudu.