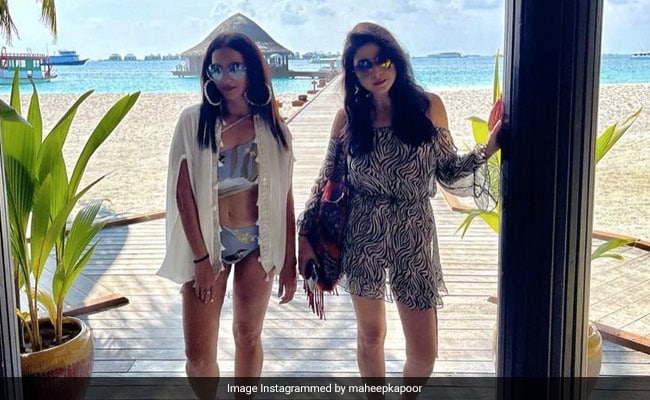 Maheep Kapoor, who has been enjoying a fabulous vacation in the Maldives with her BFF Seema Khan, dropped new pictures from the holiday on Instagram on Thursday. Maheep and Seema are joined by Maheep's son Jahaan Kapoor on the vacation. In the recent pictures that Maheep shared on Instagram, the two BFFs can be seen posing against the picturesque blue backdrop of the Indian Ocean. Maheep also shared a picture of Jahaan that features him wearing goggles and an underwater breathing device. It seems like he is all set to take a dip in the ocean. "So grateful to be here with my son and my friends, #makingmemoriestogether," Maheep wrote in the caption of the post.

Yesterday as well, both Seema and Maheep had shared several pictures from their Maldives trip. Some of the pictures from yesterday feature the two soaking up the sun on the beach.

Check out some pictures here:

Maheep Kapoor, who is a jewelery designer and the wife of actor Sanjay Kapoor, has been best friends with Seema Khan for the past 25 years. Seema Khan is a fashion designer and the wife of actor-producer Sohail Khan. Seema and Maheep starred together in Netflix's hit show The Fabulous Lives of Bollywood Wives. The show was based on the lives of four star-wives including Bhavana Pandey (wife of Chunky Pandey) and Neelam Kothari (married to Samir Soni) along with Seema and Maheep. Karan Johar was the producer of the show.