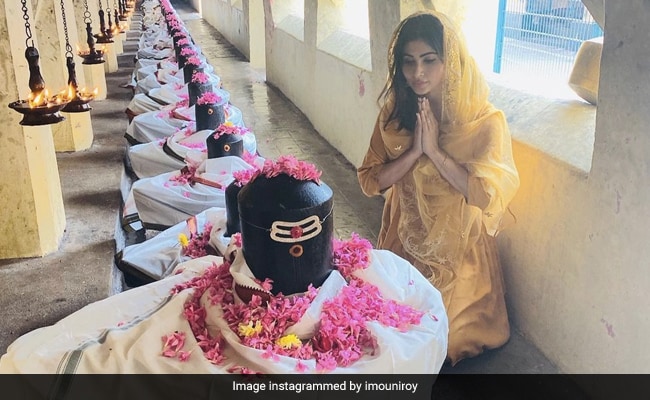 Mouni Roy, on the occasion of Maha Shivratri, shared pictures from her celebrations on her Instagram profile on Thursday. In the pictures, Mouni Roy can be seen praying as she sits dressed in traditional outfits. She can be seen dressed in a yellow suit in a few pictures, in the others, she can be seen wearing a traditional white outfit. The actress, who played the role of Goddess Sati on the popular TV show Devon Ke Dev...Mahadev, sharing the pictures from the festivities, captioned the post: "My dreams desires destiny intertwined, my dawn to dusk, my one and only. Shiv-shiv."

Mouni Roy frequently shares posts from different facets of her life on her Instagram profile. On Women's Day, she shared this picture on social media and she wrote: "Happy Women's day warrior princesses and to our princes' too! #ThoughEverydayIsOurDay."

Mouni Roy, a popular face in the Indian television industry, has been a part of shows such as Kasturi, Devon Ke Dev...Mahadev and Naagin. She has also participated in reality shows like Nach Baliye 6, Jhalak Dikhhla Jaa 7 and Zara Nachke Dikha.

The actress stepped into Bollywood with the 2018 sports drama Gold, starring Akshay Kumar. She has featured in films like Made In China, in which she co-starred with Rajkummar Rao, and Romeo Akbar Walter with John Abraham. She was last seen in Zee5's London Confidential. The actress will next feature in Ayan Mukerji's Brahmastra, in which she will share screen space with Amitabh Bachchan, Ranbir Kapoor and Alia Bhatt.