One survivor of the Pulse shooting is demanding an apology from the pop star. 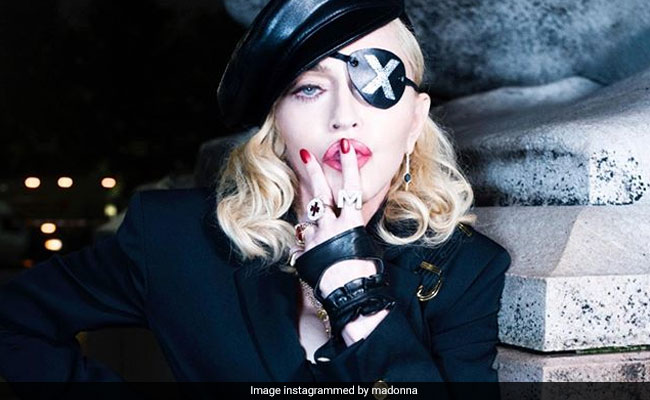 Madonna's woke, y'all, but not everyone is pleased about it.

From the start of her career, the singer has been defined by her provocateur status as much as her pop songs, often pushing sexual boundaries while dabbling in religious iconography. Now, she's using her role as an instigator of controversy to take on gun violence in America.

The vehicle: An eight-minute-and-21-second video for her anti-gun anthem God Control that, with slick production values and borderline-cartoonish aesthetics, depicts a shooting in a night club, clearly meant to evoke the June 2016 massacre of 49 people at Pulse, a gay Orlando nightclub.

The video, released Wednesday, opens with a title screen bearing a message: "The story you are about to see is very disturbing. It shows graphic scenes of gun violence. But it's happening every day, and it has to stop." By Thursday morning, it had already clocked more than 1 million views.

Madonna doubled down on the message with a tweet: "This is your wake up call. Gun violence disproportionately affects children, teenagers and the marginalized in our communities. Honor the victims and demand GUN CONTROL. NOW. Volunteer, stand up, donate, reach out."

This is your wake up call. Gun violence disproportionately affects children, teenagers and the marginalized in our communities. Honor the victims and demand GUN CONTROL. NOW. Volunteer, stand up, donate, reach out.

Most of the Jonas Akerlund-directed video intercuts two seemingly connected scenes. One shows Madonna, dressed like the 1960s ideal of a journalist with a white button-down and black-framed glasses, sitting at a desk surrounded by stacked books, crumpled paper and portraits of influential women including Angela Davis and Frida Kahlo. As the camera cuts back to her, her lace gloved fingers being typing the opening lyrics of the song: "Everybody knows the damn truth / Our nation lied, we lost respect / When we wake up, what can we do? / Get the kids ready, take them to school."

Other lyrics include: "People think that I'm insane / The only gun is in my brain / Each new birth, it gives me hope / That's why I don't smoke that dope."

It's intercut with a sequence showing a hipster-looking man (think a skinny Weird Al Yankovic) shooting up a glittery nightclub with an automatic weapon. At one point, the shooter kills himself with a pistol, but then he seems to continue his attack. The chaotic camera lingers on bloodied bodies, and the gunshots drown out the strangely dance-y music.

A time stamp appears in the bottom left corner with each switch, confusingly marking time moving backward, even though the events seem to unfold normally - either a lazy mistake or one heck of a clumsy metaphor.

This being Madonna, at one point the scene switches to a Catholic church. A statue of the Virgin Mary fills the screen, before the camera pulls back to reveal a string of rose-covered coffins lining the aisle between the pews. Toward the end of the video, Madonna, taking a break from attending a dance club of her own, is held up by two men wielding a long-nose revolver. It ends with shots of news coverage about various real-life shootings, and a close-up of the singer's face with a single tear rolling down her cheek.

The message is clear: Madonna wants to raise awareness of gun violence. But it caused some real pain.

Patience Carter, a survivor of the Pulse shooting the video seems to portray, called on Madonna to apologize.

"As a survivor of gun violence, it was really hard to watch. For someone like me, who actually saw these images, who actually lived these images, to see them again dramatized for views (and) dramatized for YouTube, I feel like it was really insensitive," she told TMZ. "It was grossly accurate to what I actually witnessed that night, and if I wasn't as strong as I was, and I didn't have as much (growth), I wouldn't have been able to make it through the rest of the day."

She later tweeted that she "couldn't even watch after the first 45" seconds" of the video. "There are so many creative avenues that could've been taken to bring awareness to gun control," she wrote, tagging the singer in her tweet. "The Victims of these mass shootings should always be taken into consideration. I applaud the attempt, but I am truly disturbed."

Others also found it to be in poor taste. "Not only is this terrible but it's offensive and during Gay Pride Month?!" tweeted one user.

"Watching new Madonna video. She's singing with her teeth clenched thru auto tune girl PICK ONE. The power in the imagery isn't matched by the chord structure of the song or the lyrical content. Oh my god this is in bad taste with the disco-beat rap," tweeted another.

"God Control, comes labeled 'very disturbing.' That it certainly is. The song itself is plain awful. The video of a shooting in some weird 70s version of Pulse in Orlando is entirely revolting. Madge, just go away. It's over," tweeted a third.

Some, though, found it powerful. The March for Our Lives organization tweeted, "Thank you for using your platform, speaking out, and creating this call to action," and called it a "powerful video that highlights the everyday epidemic of gun violence." Actor George Takei also thanked Madonna a in a tweet and called her "a much welcome voice in the battle for #GunViolencePrevention."

Polarization, of course, is familiar territory for Madonna.

In 1986, she portrayed a pregnant Staten Island teenager who tells her father she's keeping the baby in the video for "Papa Don't Preach," drawing protestation from Planned Parenthood. The group urged radio stations to boycott he song because they claimed it promoted teen pregnancy. Three years later, the video for "Like a Prayer," which is about fighting racial injustice, finds the singer dancing in front of burning crosses and kissing the statue of a black saint (who comes alive). It drew such ire from both the left and the right (including that of Pop John Paul II), that Pepsi pulled a major ad featuring the song after only airing twice in the U.S.