"There's no one like you and that's your biggest power," wrote Madhuri Dixit 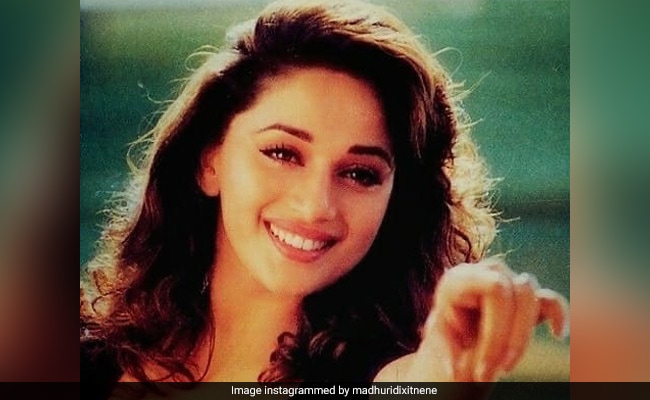 Madhuri Dixit made the most out of Throwback Thursday. The Dil To Pagal Hai actress, on Thursday, added to her throwback-diaries by posting a picture of her younger self on Instagram. In the picture, Madhuri can be seen posing with her million-dollar smile as she points at the camera. Sharing the picture that took us back in time, Madhuri wrote: "There's no one like you and that's your biggest power." She also added the hashtags #PauseAndRewind and #ThrowbackThursday to her post. Have a look at Madhuri's post here:

There's no one like YOU, and that's your biggest power! #PauseAndRewind #ThrowbackThursday

The Devdas actress frequently posts throwback pictures on her Instagram profile. Have a look at some of her posts here :

Throwback to #Devdas which will always be a film very close to my heart! From working with all the talented actors and technicians, to the dances, to wearing some of the finest outfits and excellent performances. It was so much fun to be a part of this beautifully crafted film #16YearsOfDevdas @iamsrk #SanjayLeelaBhansali @aishwaryaraibachchan_arb

She shared this picture with Salman Khan with the caption : "Blast from the past." Madhuri and Salman have featured in films such as Saajan, Dil Tera Aashiq, Hum Aapke Hain Koun and Hum Tumhare Hain Sanam.

The 52-year-old actress shared this throwback from the sets of the 1989 crime drama Ram Lakhan. The film was a multi-starrer that featured Anil Kapoor, Jackie Shroff, Madhuri Dixit, Dimple Kapadia, Raakhee and Anupam Kher among others.

On the work front, Madhuri Dixit is best-known for her performances in films such as Dil, Beta, Anjaam, Dil To Pagal Hai, Hum Tumhare Hain Sanam, Dedh Ishqiya and Gulaab Gang among others. She was last seen in the 2019 period drama Kalank, which featured Sonakshi Sinha, Alia Bhatt, Varun Dhawan, Aditya Roy Kapur and Sanjay Dutt in pivotal roles. The actress has not announced her upcoming projects yet.