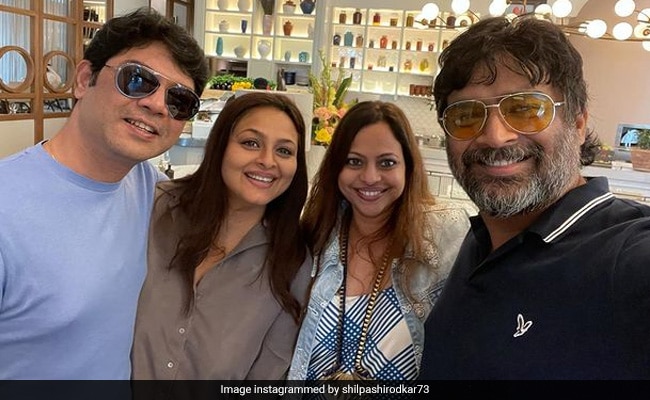 R Madhavan and his wife Sarita Birje, who are in Dubai currently, met friend and actress Shilpa Shirodkar and her husband on Monday and had a great time "chitchatting" over lunch. Shilpa Shirodkar lives in Dubai with her family. Her sister Namrata Shirodkar worked with Madhavan in films like Dil Vil Pyar Vyar and Kettavarellam Padalam. Sharing a photo from their get-together, Shilpa Shirodkar wrote: "An afternoon well spent with the sweetest and most humble couple thank you Sarita Birje for making it happen and Madhavan, looking forward to seeing you again soon over lots more chitchatting. #lifeindubai #friends #family."

Madhavan, in June, flew to Dubai to celebrate his birthday with his family.

Madhavan has featured in Hindi, Tamil, Kannada, Telugu and English films. He is known for his performances in Bollywood films like include 3 idiots, Rang De Basanti, 13 B, Tanu Weds Manu, Guru, Rehnaa Hai Terre Dil Mein and Zero, to name a few.

Shilpa Shirodkar was one of the leading actresses in Bollywood through the Nineties. She made her acting debut with 1989's Bhrashtachar, which also featured Mithun and Rekha. Her other films include Kishen Kanhaiya, Trinetra, Aankhen, Khuda Gawah and Bewafa Sanam. Shilpa took a break from acting after appearing in 2000 film Gaja Gamini and married banker Aparesh Ranjit.