"What's a relationship without some baggage?" wrote Soha Ali Khan 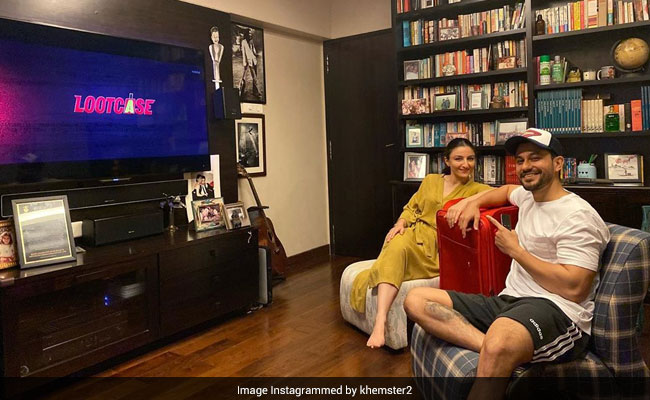 Kunal Kemmu's Lootcase is now streaming on Disney+ Hotstar and the actor watched the film along with his wife and actress Soha Ali Khan. On their respective Instagram profiles, both Soha and Kunal shared pictures from the film's in-house screening. In the picture, Soha and Kunal can be seen happily posing with a red suitcase (which shapes the plot of the film) as they watch Lootcase. Sharing the picture on Instagram, Soha accompanied it with a hilarious caption that read: "What's a relationship without some baggage? Lootcase. Watch it now." The caption on Kunal Kemmu's post read: "Pati Patni Aur Lootcase Ready? Let's watch it then."

Lootcase, which released on streaming platform Disney+Hotstar on Friday, opened to average reviews from film critics. In his review for NDTV, film critic Saibal Chatterjee gave the film 2.5 stars out of 5 and wrote: "Kunal Kemmu, as the well-meaning ordinary man who succumbs to greed and plunges into confusion, is relatable as a man next door. Rasika Dugal is flawless as the feckless homemaker who constantly harangues her husband for failing to bring home enough dough."

Lootcase, directed by Rajesh Krishnan also stars Rasika Dugal, Ranvir Shorey, Gajraj Rao, Vijay Raaz in pivotal roles. The film showcases the story of a man named Nandan Kumar (Kunal Kemmu), who chances upon a suitcase and discovers that it is full of cash. What follows is a comedy of errors. Lootcase was announced as one of the seven Bollywood films to release on OTT platform Disney+Hotstar.