Look What Zayn Malik Found In His Family Album 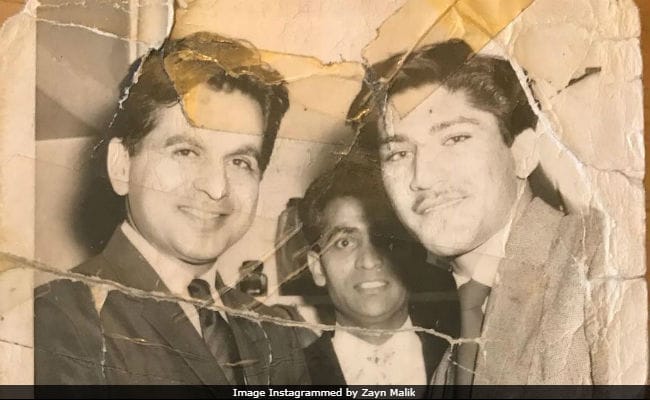 New Delhi: Pop singer Zayn Malik recently shared a throwback picture of his father posing with legendary Indian actor Dilip Kumar. The vintage picture appears to have several cracks and is believed to have been fished out from his old family albums. The 25-year-old singer posted this photograph on his Instagram and captioned it: "Abu with Dilip Kumar." Dilip Kumar, 95, is one of the biggest stars of the Hindi film industry and ruled Bollywood during the 60s and 70s. The vintage photograph on Zayn's Instagram was liked 9 lakh times.

Zayn Malik's father Yaser Malik and actor Dilip Kumar were born in Pakistan. However, in late 1930s, Dilip Kumar and his family relocated to Mumbai. Dilip Kumar still has an ancestral home at Qissi Khawani Bazar in Peshawar, Pakistan. The property has now been turned into a national heritage site.

In 2015, Zayn after announcing his departure from One Direction, made a surprise visit to Pakistan, to go 'back to his roots and take a break from life in the limelight.'

The former One Direction member recently featured on the cover of Elle India's February edition and admitted that he 'grew up watching Amitabh Bachchan and Aamir Khan,' but of late has turned a huge fan of superstar Shah Rukh Khan. He said, "If you ever get a chance to watch a good Bollywood movie, watch Devdas! Have you seen Devdas? It's got Shah Rukh Khan in it. You know who Shah Rukh Khan is?"

He initially 'found Shah Rukh Khan, a tad arrogant in the movies.' "I personally wasn't a huge fan until I met him. I realised how humble he is. Really showed a different side to him. He always came across as slightly arrogant in the movies to me but when I met him in real life, he was so nice. He just completely changed my opinion of him," reported Elle India.

Shah Rukh Khan and Zayn Malik met for the first time at the Asian Awards in London, back in November 2015.

As a surprise for his fans in India, the singer has even recorded his first ever Hindi song, which has a bit of 'Arabian influence'. "It's one of the first songs I've sung in full Hindi, so it's going to be cool to see what the response is," he told Elle India.
Comments
Zayn MalikDilip Kumar