"Congratulations my boy. Finally the mighty Bhallala Deva is struck by cupid and getting hitched. 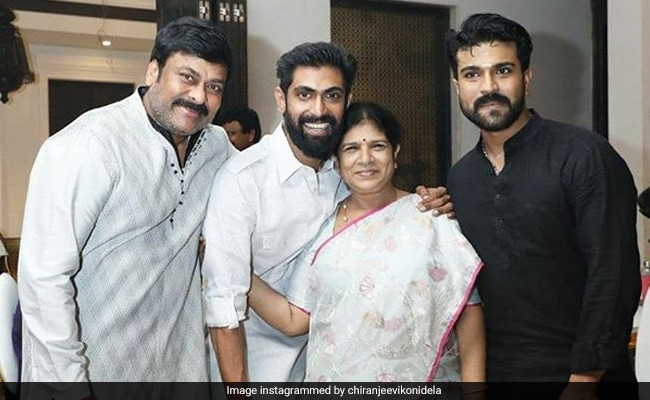 Of all the congratulatory messages received by Rana Daggubati for his engagement to Miheeka Bajaj, perhaps Chirajeevi's is the most filmy one. On Tuesday, the Baahubali star revealed he's engaged to Hyderabad-based entrepreneur Miheeka and was showered with blessings and best wishes. Chiranjeevi, whose son Ram Charan is childhood friends with Rana Daggubati, dedicated this a message to the newly engaged with a Baahubali reference: "Congratulations my boy. Finally the mighty Bhallala Deva is struck by cupid and getting hitched. Lockdown leads to wedlock. God bless you both." Rana Daggubati played the mighty Bhallala Deva, the antagonist, in the Baahubali series of films.

While the lockdown will extend into the next phase, no details about Rana and Miheeka's impending wedding have been announced.

Congratulations my Boy @RanaDaggubati Finally the mighty #BhallalaDeva is struck by Cupid & Getting hitched. #Lockdown leads to #WedLock. God Bless You Both!. #MiheekaBajaj

A post shared by Chiranjeevi Konidela (@chiranjeevikonidela) on May 12, 2020 at 6:01am PDT

Meanwhile, Ram Charan congratulated his friend with this post: "Finally, yay!" he wrote. Ram Charan's wife Upasana's excitement also spilled onto Instagram as she wrote in her Instagram story: "So happy!"

Rana Daggubati's engagement announcement was a happy surprise for fans as the actor managed to keep his love life under the radar all this while. Rana shared the big news with his Instafam on Tuesday with this post.

Miheeka, who is from a reputed business family of Hyderabad, runs the interior designing and event management firm Dew Drop Design Studio. She studied Interior Designing at Chelsea University. Her sister-in-law Sasha is designer Kunal Rawal's sister. Kunal Rawal is a close friend of Sonam Kapoor's family and so is Miheeka Bajaj.