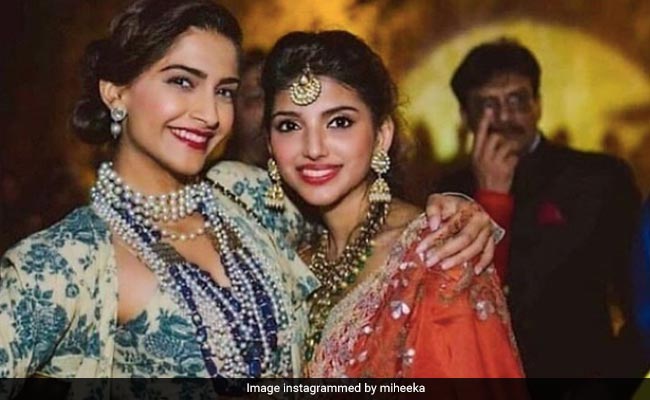 Ever since south star Rana Daggubati announced his engagement with entrepreneur Miheeka Bajaj on Tuesday, congratulatory messages for the couple from their friends and family members have been pouring in continuously on social media. The best wish arrived from Miheeka Bajaj's close friend, actress Sonam Kapoor. Soon after Rana Daggubati shared the good news, Sonam, who is very close to Miheeka, took to Instagram to welcome the Baahubali actor to the family. She posted a picture of the soon-to-be married couple along with a sweet note, in which she adorably told Rana Daggubati to always keep Miheeka "happy". "Congratulations my darling baby, Miheeka. I love you, doll. You deserve the best. Rana Daggubati better make you happy. Love you both! Welcome to the fam, Rana!" wrote Sonam in her congratulatory message. 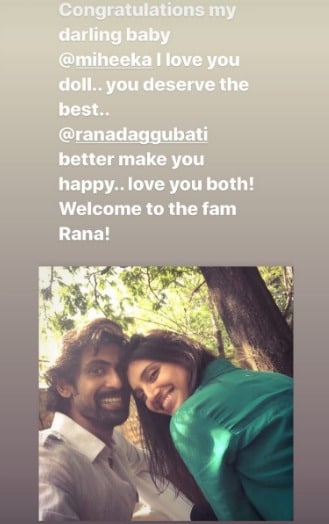 Glimpses of Sonam Kapoor and Miheeka's friendship have been shared by the latter on her social media profile. On Sonam Kapoor's birthday last year, Miheeka shared a picture of herself with the actress and wrote: "Happy birthday, Sona! Here's to many more nights of binging on junk, making you do my art projects and fussing to sit on your lap! Love you to the moon and back." One of Miheeka's previous post, which is from Sonam Kapoor and Anand Ahuja's mehendi ceremony, is also going crazy viral on social media. Not only Sonam but her sister Rhea Kapoor is also a good friend of Miheeka.

On Tuesday, Rana Daggubati confirmed his engagement with Miheeka with a simple yet very sweet post. He shared a picture of themselves with this caption: "And she said yes!" In case you haven't seen the actor's post, which is trending incessantly on social media, yet, check it out now: