"Live Every Moment": What Shilpa Shetty Tells Herself When She Wants To "Call A Time Out"

"As much as I may want to call a time out in my life, I will live every moment as fully as I can," read the note shared by Shilpa Shetty 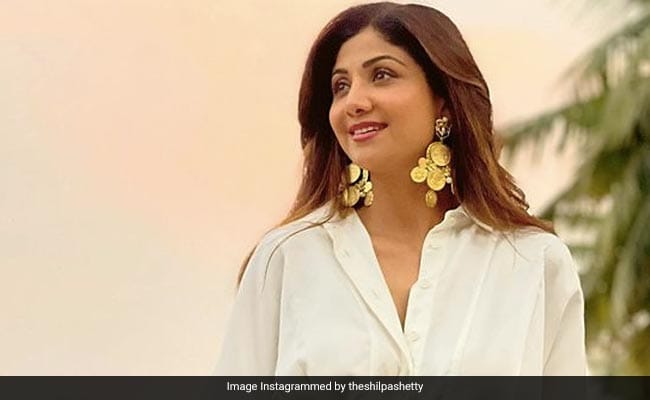 Actress Shilpa Shetty, who recently resumed work after a hiatus of a month, shared an inspirational quote on Instagram along with her mantra for life. "Live every moment," wrote Shilpa Shetty along with the snippet of a page out of a book, which elaborates on Shilpa Shettty's take on life. The note starts with a quote by French writer Simone de Beauvoir: "Live with no time out," and continues to say: "As much as I may want to call a time out in my life, I will live every moment as fully as I can." Shilpa Shetty's new post is an addition to the series of cryptic notes she has been sharing on Instagram since her husband, businessman Raj Kundra's arrest in a case involving pornographic filmmaking.

Here's what Shilpa Shetty shared in her Instagram story: 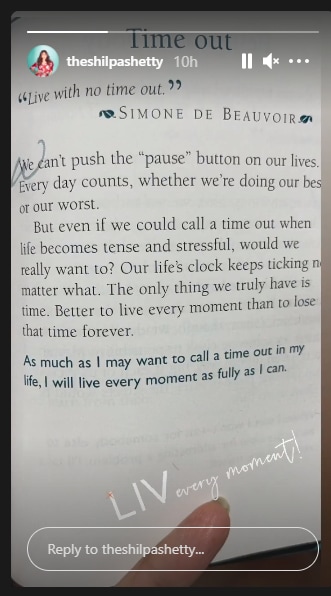 Raj Kundra, who is currently in jail, was arrested by the Mumbai Police last month in a case involving production and distribution of pornographic clips on mobile apps. The Police also clarified that investigations have revealed no active role of Shilpa Shetty. The actress had stopped working for almost a month but returned to the sets of Super Dancer 4 as a judge last week. Shilpa Shetty marked the day she went back to work with this post: "There is no force more powerful than a woman determined to rise."

On the sets of Super Dancer 4, Shilpa Shetty reportedly got emotional as she revealed she wanted to resume work "for her own sanity," reported Times Of India.

After the arrest of her husband, Shilpa Shetty issued a statement on social media addressing "a lot of unwarranted aspersions" cast by media on her. An excerpt from her statement read: "MY STAND... I HAVE NOT COMMENTED YET and will continue to refrain from doing so on this case as it is subjudice, so please stop attributing false quotes on my behalf. Reiterating my philosophy of, as a celebrity 'Never complain, never explain'. All I will say is, as it's an on-going investigation, I have full faith in the Mumbai Police and the Indian judiciary."